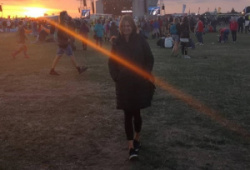 Poet Maggie Sawkins has investigated the dialect poetry of the ‘island city’ of Portsmouth in a BBC Radio 4 programme broadcast on Sunday. Maggie Sawkins, pictured, is a winner of the Ted Hughes award for innovation in poetry, and her organisation Tongues and Grooves has run live poetry and music events in Portsmouth for many years. She uses poetry to promote mental health and social inclusion, and in the programme discusses poetry’s role as an aid to well-being, and how her work is deeply rooted in the culture of her home town, including dialect words like ‘squinny’ (whinger) and ‘snoozecase’ (pillowcase).

Portsmouth is described as an ‘island city’ because of the narrow Portsea Creek separating it from the mainland. Its dialect has been influenced by long naval connections, distinctly different from the surrounding Hampshire areas. With a literary legacy that includes Dickens (whose father worked here in the dockyard), and a plethora of modern-day dialect poets and prose writers, the city is currently experiencing a literary rebirth. It was noted by the recent national Places of Poetry map that there were more contributions from Portsmouth than any other part of the country.

The Portsmouth dialect - or ‘Pompey Speak’ - is different structurally and phonetically not only from surrounding Hampshire but also from all other regional English accents, and can be heard in the speech of young children as well as 90-year-olds.

On the programme Maggie Sawkins, whose film-poem The Unfortunates re-imagines Portsmouth’s maritime district, an area once crowded with pubs, brothels and money lenders, meets fellow poets Denise Bennett and Liz Neal at the city's historic dockyard; at Fratton Park, home of Portsmouth FC, she talks to George Marsh, former poet in residence, to find out how working with Pompey fans has inspired his poetry; and heads to the roof of the Square Tower in Old Portsmouth, the home of her own poetry and music club, Tongues & Grooves, to talk to Al Wright about his novel The Winch, set in a futuristic Portsmouth where people still use a version of the dialect.

The programme also hears from poet Jackson Davies about 'sailor speak', and Maggie investigates how dialect poetry can aid mental health. Graphic designer George Bodkin, from the art collective Pompey Banana Club, discusses how dialect has moved from street slang to being celebrated in various art forms around the city.

Maggie said: “I was contacted a while ago by Catherine Harvey, a producer for Tongue and Talk, a series exploring dialect poetry in different parts of the UK. It had been suggested to Catherine that Portsmouth would be an interesting subject for series five. Out of the blue, Catherine asked if I would like to host the programme myself! I spent two days recording in Portsmouth and a further three days with the editing team (via Zoom) until the final mix was ready. Some of the feisty local dialect had to be approved by the BBC.”

You can hear the programme, a Made in Manchester production for the BBC, here

◄ 'Don’t go down to the Railway Inn with anyone else but us!': Write Out Loud's poetry jam returns to regular jazz festival venue

Celebrating the Horovitz poetry family and the Slad valley ►

There's another one, from Liverpool, here https://www.bbc.co.uk/sounds/play/m0019r7h

I enjoyed this very much. I spent the best part of a year in Portsmouth in the 1970s and remember one crossroads in the dock area where you could almost touch four pubs - one on each corner - from the middle of the road.

Ooo this looks very interesting! My lovely dad came from Pompey, was a sailor in the Royal Navy, but I'm not sure some of his words would be acceptable haha. I spent a lot of time there as a child and teenager. I'll have a listen to both of these. Nice one.