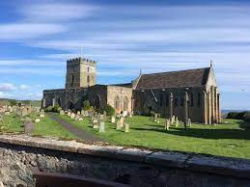 Northumberland’s rich heritage, and what is termed its ‘Golden Age’, were glimpsed at a remarkable poetry reading below the magnificent and imposing Bamburgh castle on the North Sea coast on Friday night. In the 19th century a storm revealed the remains of what turned out to be Anglo-Saxon people from 1,400 years ago – a cemetery uncovered in sand dunes close to the castle, in an area known locally as the Bowl Hole. These remains of over 120 skeletons have been recently re-interred in the crypt at nearby St Aidan’s church, pictured, after an 1999-2007 archeological project investigated who these people were, and where they came from, as far as could be established.

The Bamburgh Bones project evolved to help tell their story, and a number of poets were enlisted to create words inspired by the project. Foremost among them was Katrina Porteous, whose ‘A Hut a Byens’, which roughly means “a heap of bones”, is the title poem of the pamphlet containing poems by Porteous, with fellow poets Juana Adcock, Catherine Ayres, Jake Morris-Campbell, Kayo Chingonyi, Richard O’Brien, Jo Clement, Jenna Clake, and Jacob Polley. 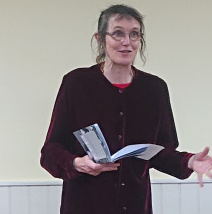 Porteous, pictured left, who lives on the Northumberland coast, explained at the reading that the local dialect spoken particularly by fishermen had “almost become extinct” over the last 60 years: “The dialect was so rich, and so difficult to understand, and I was fascinated by it … it still lies buried in local place names.”   The local dialect was rooted in a mix of Anglo-Saxon and Scandinavian. Her poem, and another called ‘The Tide Clock’, is packed with local words, with the opening line “Skyeldeman [stranger], wor nyems [names], fetched far fr’ hyem”, referring to the fact that archeaologists discovered from the remains that most of the people were not local, coming from the Mediterranean, as well as Scotland and Ireland. It also, she said, represented “the last journey of the fragments of Anglo-Saxon that are still alive in the language”.

Northumberland's 'Golden Age' refers to a period of cultural flowering in the Anglo-Saxon kingdom of Northumbria around the mid-seventh to the mid-eighth centuries, before the incursions of the Vikings. It was documented by the Venerable Bede, and produced such wonderful artefacts as the Lindisfarne Gospels.

Richard O’Brien’s ‘Questions of the Villagers’ concerned the introduction of Christianity to the region by St Oswald and Aidan, speaking in Old English and Old Irish: “Will death be different / once the two of you get back on your horses?” O’Brien is a lecturer in creative writing at Northumbria University. 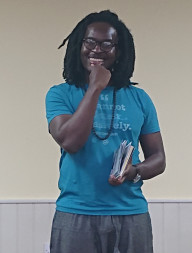 The first experience of the UK for Kayo Chingonyi, pictured right, was when he arrived from Zambia, and “spoke fluent English”. Newcastle was his initial port of call: “I said, ‘what kind of English is this?’ ” His poem, ‘The Fenwick’s Window’, focused on Newcastle’s famous and much-loved department store, where locals queue round the block to view its Christmas window displays: “Is not this, too, consecrated ground?” the poem asks.

Catherine Ayres lives and works in Alnwick, south-west of Bamburgh. She is currently researching Roman women who lived in the forts on Hadrian’s Wall at the time of Roman occupation. Her poem ‘The Irish Girl (Skeleton 73)’ tells of someone who is understood to have “spent your short life / at the loom”, with a front tooth that “held a needle’s groove”, details ascertained by the archeaologists. 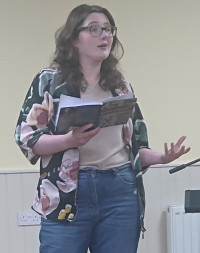 Jo Clement, pictured left, is editor of Butcher’s Dog poetry magazine, and a creative writing lecturer at Northumbria University. The majority of the remains in the Bowl Hole were allocated genders according to the size and shape of their pelvis, but many of the skeletons remain 'indeterminately classified'. Clement said that she often writes about “others, marginalised groups”, and “was interested in the pursuit of gendering bones in mortuary archaeology. What meanings does gender confer upon the lives of these individuals? I don’t suggest any of the bones belonged to non-binary, fluid or transgender folk but I wanted to honour that presence and possibility, because there is evidence that non-gender conforming people have been around for centuries." Her poem in the pamphlet is titled ‘sexing the bones’, and her debut collection Outlandish is published by Bloodaxe.

Jacob Polley, who teaches at Newcastle University, said of his poem ‘Find’: “I thought about the bones as evidence, partly of unknowability. All the things we can’t find out … what made them, them.” There were also poems from Tony Williams, of Northumbria University, and John Challis, from Newcastle University. The two introduced the poets, and had commissioned and arranged the pamphlet poems. Another reader was Nathan Castle, a member of the school poetry club in Alnwick where Catherine Ayres teaches. There was musical entertainment in the interval, with Mark Deeks showcasing on keyboards a couple of numbers from his doomy metal album Take Up My Bones, about another Northumbrian saint, St Cuthbert. 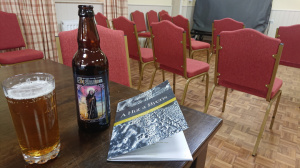 The evening was compered by the effervescent Jessica Turner, project officer for Accessing Aidan/ Bamburgh Bones, who enthusiastically invited the audience to avail themselves of the free drinks – including St Oswald and St Aidan beers – and food, including special pies baked to Anglo-Saxon recipes and ingredients. This was all courtesy of the National Lottery Heritage Fund. It’s not often at a poetry event that there is free entry, a free booklet, plus free vittles as well. No wonder the Bamburgh Pavilion, beneath the castle and looking out on the croquet lawn and cricket pitch, was packed!

Never mind a Golden Age, it was a golden evening. St Oswald's and St Aidan's ale flowed. But joking aside, there is a magic about places in Northumberland such as Bamburgh - a link to the past, that you can feel. The locals are proud of and rever their Anglo-Saxon bones. And so they should.

I told you not to tell anyone, Greg!

I stumbled upon it while searching for open-mic nights in the area, Julian. Northumberland is a wonderful place!

Free booze and vittles? You kept that one to yourself!

More seriously, what a fascinating evening it sounds to have been. Great review, Greg. Thank you.