The Country With No Playgrounds: Elena Croitoru, Live Canon 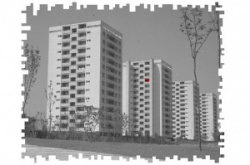 Prize-winning poet Elena Croitoru is a British-Romanian writer based in Kent. She holds an MSt (Master of Studies) in creative writing from the University of Cambridge and is a writer of poetry, novels, short fiction and creative non-fiction. The Country With No Playgrounds is her debut poetry collection and was the winner of the Live Canon poetry pamphlet Competition 2021. It is based on her experience of growing up during Nicolae Ceauşescu’s regime and the post-communist depression.

The poems in this pamphlet focus for the most part on the fragility of existence through imagery such as a dead bird inside the shell of a miniature egg, the white flesh of fish “falling apart into flakes as if / it never belonged to a living thing”, references to power cuts, rationing, left-over reminders of the communist era and, above all, the longing to escape “when there was no getting out”.

The uniform anonymity of concrete flats in the cover photograph reflect the brutal architecture of communism. It is no coincidence that “tower blocks” occur at least seven times in the 18 poems that make up this collection. They are the sentinels that stand and keep watch, or, to use the medical meaning of ‘sentinel’, an indicator of the presence of disease. In ‘Hospital View’, when the narrator visits her father, Croitoru writes:

I asked if he was hungry & he said

his ration card filled out too soon.

But communism had ended years before,

though I still saw its geometric ghost

spread over the tower blocks beyond

That geometric ghost of communism is present in the photograph. It manifests itself in the one window that is coloured red in the second tower block, four storeys down from the top.

In the first poem ‘Playground’, there is a telling opening line: “We grew up in our spare time”. It is a line that is saying that there was barely any time in which to grow up, let alone experience the innocent world of childhood. It was not a time of enrichment, it was a thin time, one that was mean and desperate.

Like many from the previous generation, the narrator’s father had lived through hell, forced to crush stones on the Danube canal, “unable to come back or speak his mind”. In ‘Hospital View’, which I have already quoted from, we are told that “He kept looking down / at his hands because for many years, / his body was the only thing / he had owned alone.” Despite all that has happened in the past, the final stanza brings home that basic, defiant instinct for survival:

If I visited too late in the evening,

it would take him a few moments

to remember me. He’d point

at the striated apples my uncle brought him

& tell me to eat, still trying to be

a father from beyond the edges

of his bed & asking

if I would come again.

Nature has a hard time in this harsh environment. In ‘Things That Are Green’ the only beauty is to be found on the exterior of the concrete flat that has “weathered to a green patina” while, overhead we are told that “Cranes scratched the sky with metal limbs”. In ‘Retrospective’ “The greenfinch stayed quiet  / as it fed….It must have noticed how silent / we had all become looking at it.”  In ‘Tower Block 12’ “The spider trapped in the man’s suitcase / is starving but can’t get out” and in ‘Mechanical Frog’ the gift of a toy frog means so much in the absence of being able to see a real one:

It felt no hunger and I could not open it up

to see how it worked because I needed it

Even though it is inanimate, it lives in the child’s imagination. When the narrator places it on the windowsill, it is “startled / at the height of the tower blocks”.

All the poems in this collection are compelling. ‘Tangerine’ is both powerful and terrifying in its matter-of-fact depiction of a shooting and a torture narrated by a schoolgirl who, “on the day they came for him” is given a tangerine to eat at school. Its elusive nature makes it even more powerful because of the things we are not told: was this the schoolgirl’s father or somebody else’s father? Did the shooting and torture take place in front of her at the school or at home? In other words, did she witness it at first hand or hear about it in graphic detail later on? The juxtaposition of the two elements, the girl being given the means to satisfy her hunger by eating the tangerine while the unnamed assassins, ominously referred to as “they”, satisfy their hunger by killing someone’s father, is chilling. In the end, the girl discards “the bullet-riddled peel / as they discarded him”.

Elena Croitoru, The Country With No Playgrounds, Live Canon, £7