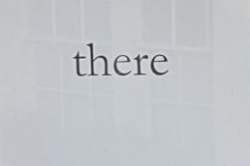 The poet and writer Clare Morris works in collaboration with the artist Nigel Bird in this engaging and interesting pamphlet. Their works not only interweave and enhance each other but also aim to support Wessex Multiple Sclerosis Therapy Centre in Warminster that has helped Nigel Bird to improve his condition and continue with his work.

They focus on important moments that are “there” - moments when you are present, fully aware of what is happening in a reality empowered by the imagination. The word “there” also points to the importance of relationships when people, families and friends are “just there” for a miraculous inspirational moment. As Clare Morris remarks in the foreword, her collaboration with Bird developed as a process in which they influenced each other, sometimes starting from the words, sometimes from the pictures. The “celebration of creativity” was crucial in their procedures and led to unexpected discoveries.

Morris’s simple and enthralling lines convey her feelings clearly as well as the thrill of new possibilities and the mysteries of the unknown she investigates in her poetry. The first poem of the collection, ‘Walking Down the River’, recalls the excitement of her first holiday in France when she was a girl: “the joy of those first steps alone/And marvel at such bravery.” In her adulthood, she maintains this openness to the world that surrounds her:

No need to huff and puff your presence yet,

it’s just the new day’s joy that warms you.

to save the moment,

to savour and stretch the moment,

to tease out and twist and turn the moment,

so that it stays no longer than you’d hoped for moment,

a hold your breath, let it be there forever because even

the magpies are mute now moment.

It is an epiphany of sorts where dark and light merge and the poet catches a glimpse of eternity, “the wonder of that moment”. A similar view is expressed in the poems ‘Landmarks’ and ‘Lauds’ in which the religious references to St Paul in the first poem and to the resurrection of Christ in the latter point to hope in “the Spirit moving within” and in the miracle of the resurrection. However, both poems end with a sombre tone, an uncertain closure in which shadow and darkness seem to obscure the effects of the revelation “on Damascene roads”.

‘Prayer’ is an example of how words and art merge in the physicality of the writing, when Nigel Bird took photographs of the words of the poem and transformed them into a work of art, enlarging “the images again and again to reveal hidden patterns”. Bird experiments to the limit of abstraction, modifying and deforming the writing and referring in this way to the climate crisis expressed in the poem. The context is “the world’s waste/the boots that bruise, the cuts that crucify,/that strip your branches/bare” (‘Prayer’). The conclusion is bleak and emphasises the impotency of the poet and an uncertain future. In a similar way, Bird’s final photo of the series is a black and white picture with random black marks that reveal the words beneath, emphasising the darkness of this perspective.

Most of the pictures are “in waves of monochrome”, like ‘Embers’ which was inspired by “bushfires lit by the indigenous peoples of the Northern Territories in Australia”; they are symbols of renewal that destroys material but also creates “forms and spirals in the smoke” that have the quality of dreams, according to Bird.

The final poems emphasise even more the unspoken and unspeakable and the sense of loss the poet experiences when facing these mysterious situations. She looks for meaning and finds some joys in new discoveries that are, however, temporary and uncertain. Unspecified flashes and epiphanies are momentary sensations that promise renewal but remain unclear:

Captive to these dead-beat sleeping-dog days.

And then sometimes, you wait and hold your breath,

hoping to be drowned by that torrent again but

the well is dry and the silence deafens

as you stare at hands

The search for meaning ends in “the ghost of an echo perched on the edge of sound” in the poem ‘There’. The situation dwells in an uncertain dimension, contingent and mysterious at the same time:

A low breath caressing the ear,

And suddenly it is alive and leaping,

A tumbling and rumbling on the path ahead,

As you step into the teeth of it.

There is “a promise of renewal, each end, a/beginning”; we wait for an answer, returning home in temporary certainty. It is “just there” where we belong with our flaws and fears, with our vulnerability that delays and obfuscates our progression but also stimulates new perceptions. It is a never-ending process that triggers explorations in art and language in a creative view that contributes to our survival.