The Hawthorne Tree at Night 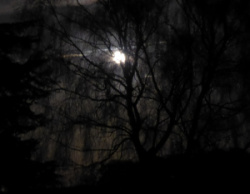 The sun now well below the horizon

Quiet, slumbering from a day of work and play

Grown-ups nod in the firelight’s glow

A ginger cat toasts his whiskers

Draped across the hearth

Outside the black tom cat

Spits at a lone rust-coated fox

Who prowls its way around the chicken coop

To escape, squeezing through a gap in the hedge

Lit by the moon, a shapely Hawthorne tree

Stiffened by the cool air, stretches

Bending a branch, it begins to scratch

At an awkward spot, where it's blossom tickles

Slowly the tree opens an eye, a second follows

Both of deep brown, edged with eyelashes of dark thorns

Shades of rose, show up his life blood

The Hawthorne has great age, which has brought power

At night he becomes filled with life

Then begins to correct the ills, that man has wrought

In another day of abusing the earth

His work is unending

But he will never stop

I agree with Stephen's comment, Brenda. I love how the Hawthorn comes to life, and has a task to do. Great.💕👍

Thank you for these comments Stephen, it's really interesting to hear how a poem is perceived by others, really helpful.

This is a marvellous poem, Brenda. I love the way it links the details of the slumbering household to the animals and then to nature's struggle for life, as exemplified by the Hawthorne tree. In spite of the unequal nature of the task in hand, this is still a poem of hope.