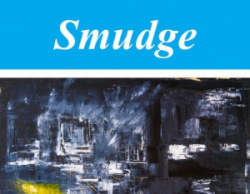 The title poem of Smudge by Dominic James refers to the mark left on glass when a face is pressed against a window. It’s an image of distance, even loneliness, and perhaps a keynote image for this collection:

I find on glass that forehead smudge of old,

a greasy badge of doubt on my reflective pane:

no longer isolation’s hostage, looking out

on trees, the weighty sky, I wonder if,

turning again, my wife, my son, my home,

all are off spinning in space,

or if the loneliness is mine.

But it’s also an image of observation, an important poetic requirement, and one that is very evident in these poems. I come away with an idea of Dominic James in a corner of some Mediterranean square, with a coffee and discreet notebook, his cap almost over his eyes, pretending to be asleep, yet keeping watch on everything. He eyes French couples at a restaurant in Morocco, against a backdrop of olives and lemons:

those girls I saw beside the Seine

on summer, back in seventy-nine,

"Tarblers", we were taught at school –

discussing everything and smoking,

… I’m pleased to see they all hold

Living it up, in old Maroc;

a stone’s throw from the desert.

This mood of lazy, sensual pleasure is repeated in the poem ‘Gazelle’, set in the same or a similar location:

In town one sees the little cats

in ecstasies of expectation,

pregnant any time of year and,

when they have their little bodies:

Other poems are often laced with myth and legend, or with ancient or historical references. ‘A Becket Gloss’ has the archbishop accepting his incipient martyrdom with inevitability, just as a prominent dissident in Russia might expect retribution from Vladimir Putin eventually. “They bore a grudge to me, / were fearful, then, who wouldn’t be – after a word, / a look, from Henry?”

The final stanza of ‘The Philistine Geographical Society’ will have a refreshing bluntness for all atheists:

And of the life and times of Jesus

We have had enough, enough. We doubt

the veracity of what he meant to say

and of what he said in the first place.

So what? Life carries on regardless.

Yet James has an eye and ear for magic, in ‘A Trumpet from the Tomb’: “I was disarmed / at twilight, driving home, to hear the trumpet’s call / restore the Valley of the Kings.”

The language of these poems is relaxed; the rhythm is crafted. Dominic James’s poems are warm and humane, although sometimes written from a certain distance. ‘Birdseed in Lockdown’ reflects with empathy and compassion on the hardships suffered during these strange and, for some, cruel times:

I would rather lend a hand than live

in isolation, having missed

was pointed out. It was, it is.

I turn to the many who wait alone

in this lucky land and are not

Email Dominic James for a copy at djamesdom7@gmail.com

From New York, to Chennai, to Bolton: George Wallace on global poetry networks, Walt Whitman, and a NYC anthology ►