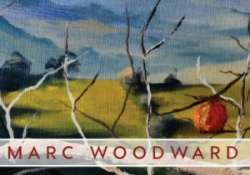 Born in New York, Marc Woodward has been a lifelong resident of rural England. He is the author of three previous collections of poetry, A Fright of Jays (Maquette, 2015), Hide Songs (Green Bottle Press, 2018) and with Andy Brown The Tin Lodes (Indigo Dreams, 2020). In addition to writing, he is also an accomplished musician and an internationally known mandolin player.

The cover image painted by Jesse Woodward is in keeping with the title. According to Greek mythology, the fruit of the persimmon tree was regarded as being the food of the gods. Unusually, its fruit ripens late in the year which means that it hangs rather conspicuously on its bare branches after its leaves have fallen. Woodward alludes to it in ‘The Boar’ where he imagines the animal “shaking / at a persimmon tree / knowing the fruit must surely fall”, the implication being that this is because everything else has already fallen. This is one of several poems set in the Maiella mountains, a wild and rugged area in central Italy that is inhabited by wolves, black bears and wild boar. Woodward’s imagined encounter with the boar is, beneath the surface, a coded personal struggle about destiny that put me in mind of Jacob’s struggle when he wrestled with an angel at Peniel. The title of the book is taken loosely from this poem.

In this collection, which contains several prize-winning poems, Woodward seeks inspiration from Italy, Switzerland and India as well as places nearer to home. The collection begins and ends with poems set in Italy. Both poems offer memorable views: one from the great outdoors, the other from a hollow tower. In the former we sense the dissipating heat of a summer’s day, where Woodward paints an atmospheric picture of “the sun’s red arc setting on the ridge, / clocking out its daily labour / in the hot factory of summer” in the latter, we feel a cool down draught of air coming through the slit windows of a bell tower.

Plenty of animals inhabit these poems: there are “stag horn beetles”, “scraggy vixens”, “soft-lowing cows”, “stealthy deer” and badgers “stripe-snouting through [a] dahlia bed” to name but a few. The collection teems with trees, tracks and grasses, waterlogged paddocks, old tyres and rusting farm machinery. The descriptions of nature are lush but there is a dark undercurrent here as well: a farm suicide, a fatal road accident, personal loss and bereavement. ‘Dog in the Afternoon’, with its echo of Hemingway (‘Death in the Afternoon’), is a compassionate poem about the demise of an old grey dog which reminds Woodward of the death of the family’s old Dalmatian when he himself was just 12 years old.

In ‘The Hum’ Woodward sets our imagination running with auto-suggestion. Nothing is explicitly stated and yet everything is signalled as a possibility when it comes to the source of the sound. It is six o’clock in the morning and we are in the heart of winter:

… by the front door I pause key in hand.

I can hear The Hum. Faint, low and constant

in the quiet of the unbroken dawn.

Its direction: everywhere – but distant.

A diesel warming up? Or staying warm

on northern driveways gripped by permafrost?

High echoes from a transatlantic flight?...

The poem sets us on edge. It conjures up the atmosphere of a Hitchcock film or a piece of science fiction from the sixties.

‘Jump’ is proof enough that Woodward can coax a poem out of the simplest of occurrences and still make it sing. In it, a man is sitting under a café awning when a torrent of rain comes. He knows he has to leave but he does not have his raincoat with him and there is no knowing how long the storm will last. We have all been there, caught out by the unpredictable weather, and so it is something we can readily identify with. But in Woodward’s hands it becomes intense and even more unpredictable:

the glazed river-road, the vulgar torrent,

the beating heart of thunder.

taking your hand, afraid you will jump.

Two poems that particularly caught my attention were ‘Rakinewis – The Capestrano Warrior’ and ‘Swimming with a Charm of Vincent’. In both cases, Woodward brings these characters, (the latter being Vincent van Gogh) back to life, momentarily, and has conversations with them in the present.

These searching poems, with their carefully crafted descriptions of the natural world, go deep. Philosophical, intelligent and compassionate, they offer us insights into life, living and being.

◄ How To Be A Dressing Gown: Charlotte Oliver, Dreich