How To Be A Dressing Gown: Charlotte Oliver, Dreich 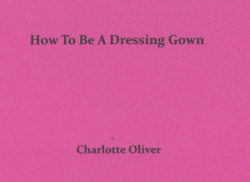 A surreal world and a strong sense of identity are depicted in How To Be A Dressing Gown, Charlotte Oliver’s debut pamphlet. Her poems evolve with vivid imagery where a clear voice transports the reader in a joyful and hopeful reality. In this fictional enthralling world, the self can be a dressing gown or a tablecloth, and a tiny bird lives within the protagonist’s chest. The perspective is unusual yet fascinating and displays a rich variety of topics and views:

Your role is that of a hug

you must channel the softness of a lullaby

and the gentleness of true love.

And, of course, have big pockets

with a tissue inside.

Her relationships with her mother and her grandmother are tenderly evoked, and her land, Yorkshire, is always present; it is her anchor and where her people “clawed their way out”, “from a childhood/in mining land/gravy-tight circles of family.” Family also conveys comfort and reassures the poet of a bond of affection that is unique even though it looks ordinary or average, like “the imperceptible inhalation of rising bread”. Nothing apparently happens but actually everything happens in this quiet unravelling of life, which is lived for the sake of it but also for the moment:

And it will bring us to where I dream of,

where the language of schedules and plans

The poems are therefore deeply rooted in the author’s family and in her land but are also cleverly open to whatever might turn up in the moment and in the future. Freshness and an exploration of possible new views are the potentials revealed in Oliver’s poems that clearly express her beliefs and views.

Charlotte Oliver, How To Be A Dressing Gown, Dreich, £5