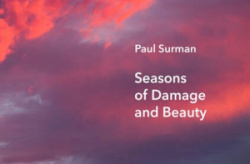 Oxford-based poet Paul Surman has written poetry since he was a teenager but did not make any serious move to get his work published until he retired early in 2004. His work has appeared in numerous magazines and his first collection, Places (Oversteps Books) was published in 2018. He is a member of Back Room Poets and regards the Chilterns as “paradise on earth”.

The first half of the opening sentence to ‘Life is a Story We Tell Ourselves by Being Sentient’ sums up, for me, the essence of this collection which addresses “The terrible fascination of being alive / in a primitive world still violent / with contradictions ...” There are, indeed, many contradictions to be found in these poems: the polar opposites of being both “king and outcast”; “day sauntering from light to dark / and back again;” things that “vanish or appear;” a village where it is only ever “high summer … or wintry Christmas”. These are poems that refuse to be pinned down, that defy a neat explanation. They inhabit a world where we are not yet fully awake or where we are suddenly conscious of an evening drawing to a close. Many of the poems are nocturnal. Surman often explores the edges of our known worlds and in so doing conjures up atmospheric scenes which we can all readily identify with. Here, for example, is the opening stanza of ‘Street Lamp’:

I like to walk to the edge of a village at night,

where habitation thins to a few lit windows

local ghost – wanders across minor roads and on

past fields of silent crops or quiescent cattle.

Sometimes his poems take on a surrealistic quality as in the closing stanzas of ‘Before Nightfall’:

A bat arrives, swerves and flutters,

like a niggling thought at the back of the garden’s mind,

but unable to jog its memory, flits into forgetfulness.

Two garden chairs, companionably side by side,

are sure their services won’t be needed

now that the light is fading, the air is growing chill,

so sit back in themselves, and take their ease.

At other times, they seem even more otherworldly when Surman writes about contrails visible behind jet aircraft engines, rain that falls in the night, the sighting – real or imagined - of an angel or horses that “disappear into the surrounding darkness”. He mesmerises us with his descriptions of a murmuration of starlings whose patterns form “dark dots, avian punctuation”.  When he looks at stars they are described in terms as wide-ranging as a “sorcery of tinsel” and “hydrogen engines”.

In ‘Invisible’, the last poem in the book, we are told that he would like to spend the last hours of his life at work in the quietest corner of a wood until he has ‘gone invisibly from the earth’.

These philosophical poems are likely to appeal to the intellect more than to the heart. They explore imagined worlds and imagined states of being. A questioning mind that is alert to all sorts of possibilities is at the heart of this volume. As mentioned at the start of this review,  resisting that urge to rush into print has paid off handsomely because these poems give the impression that they have been worked on many times over to reach their present state. It is clear that every word has been carefully thought out and every line inwardly voiced to give an overall feel of confident assurance. For Surman, writing poetry is as good a reason as any for being alive. The stunning cover photograph entitled ‘Horspath Sunset’ by Christine Surman is an essay in itself on transient beauty and a fitting advertisement to the text that is contained within.

Paul Surman, Seasons of Damage and Beauty, Dempsey and Windle, £10

We Have to Leave the Earth: Carolyn Jess-Cooke, Seren ►