We Have to Leave the Earth: Carolyn Jess-Cooke, Seren 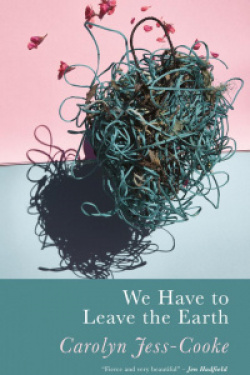 Bearing witness to environmental issues that interweave with our vulnerable and imperfect human condition is the reflection that Carolyn Jess-Cooke develops in her poems.

The collection is divided into four sections that consistently and clearly explore themes linked to global warming in the Arctic and the consequences for the planet; the author’s experience as a mother of an autistic child; Josephine Butler, a feminist historical figure; and our future on the Earth. The different themes are not isolated but interweave in a discourse that is honest and brave and that speaks to the heart, alternating dark and positive moments. The night seems to prevail, but love surfaces again eventually. The poet is moving towards a goal that is never reached. She is a nomad whose journey envisages a promise in an ideal positive future that is, however, under threat if we do not control our destructive impulses.

The first poem, ‘Now’, seems to emphasise love despite the flowing of time that brings inevitable death:

which is why love is the base principle

of time, at once reflecting and illuminating passages

to their possibility of loss, the unknown,

and yet each now restores love, is made of it.

However, the title poem, ‘We have to Leave the Earth’, reveals a bleaker view. The killing of Jews in gas chambers is related to our compulsive capacity to destroy, our “urge to obliterate the Other”, and consequently “we have to leave the earth/because we know too many ways to destroy her”.

The first section, ‘Songs for the Arctic’, reveals how the Arctic’s extreme landscape and weather hide death but that it can also be a place to live in if you respect and adapt to its conditions:

The Arctic wanted to kill us. This was the first thing I knew.

The ice was not a substance but an organism, a Hydra, hell-bent

on chewing our sloop, Gjøa, to death. I clung to the bow for days.

Didn’t eat. Didn’t sleep. The wind wheeled blades all but

skewered our souls out of our ribs. We overwintered with the Inuit,

and driving dogs. We learned their language, learned not to regard

ourselves in combat with the Arctic but symbiotic, weft in her

treachery, her stealth. This knowledge was wealth.

As Jess-Cooke writes in a note, “light reflecting off the snow-covered (white) surfaces of the Arctic is crucial because it bounces light back to the sun and keeps the area cool. The less ice, the more sunlight (and thus heat) is absorbed by the water, thus speeding up the warming of the sea.”

“In the end there will be ice’, which seems to be so important for the well-being of the whole planet. Understanding the power of ice and understanding the dark are a way to survive, to get through the night on global and personal levels.

The poems in the second section suggest a period of depression and include some tender and compelling lines about an autistic child:

They said she had repetitive behaviours and that was the deal-breaker, the peak of the triad, the irrevocable sign of something        more than a speech disorder, and because of this I didn’t believe it, not fully.

Mourning for the damaged Earth also means mourning for the future of humanity in a time when “there will be no towns, no schools, no warm beds in which to hold each other in the still sure light”.

The section dedicated to Josephine Butler, a feminist activist who lived in the Victorian age and who was part of the suffragette movement and fought against child prostitution, includes Jess-Cooke’s poetry in an ongoing commitment to fight against injustices and exploitation. Destruction and discrimination happen everywhere and cause immense suffering and eventually death. Fighting against these issues seems to be a duty of every human being and a commitment for life, though the results of these fights do not seem to be definitive. The poems evoke the sudden death of Butler’s daughter, Eva, after falling from a banister while playing at home. The event haunted Butler’s life and contributed to her enduring commitment to helping others. She campaigned for women’s rights and founded houses for prostitutes to live in at a time when girls as young as twelve were sold to buyers on the continent as sex slaves and often contracted venereal diseases.

The final poems reiterate the destructive attitude of humanity: “centuries of humans/on their knees, gagged, raped, chained” and our condition as refugees or persecutors of refugees. However, the final hymn to the earth, ‘Hymn to be Sung Underwater’, seems to give hope, voicing repentance and asking for protection against our own flaws. A “boundless re-beginning” is evoked in a possible hopeful vision that might rewind what we did wrong.

Carolyn Jess-Cooke, We Have to Leave the Earth, Seren, £9.99