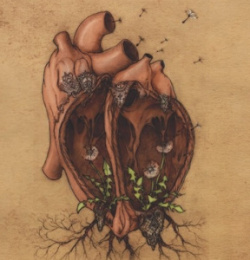 Last year the poet Adam Horovitz published his latest collection. It was also the year when he lost his father, the legendary Michael Horovitz, at the age of 86.

There is a poignant poem about Michael Horovitz, ‘Returning to Frankfurt’, in which the pair visit the German city which Horovitz senior fled as a Jewish child refugee in the 1930s … “his smile is child-like, a little lost / in the streets of a home he can’t remember.” There are also poems about Adam's dying mother, the poet Frances Horovitz, laughing “although it hurt”, and tender Christmas memories of her “briefly strong again” in ‘The Singing Street’ and ‘Orcop Christmas’.

Horovitz queries the business of Remembrance, in a poem that includes an ironic reference to Wilfred Owen, wondering what his German ancestors died for in the first world war:

with his memories in the garden of his weekend home

until he was forced to cross Germany’s borders

and escape into England two decades on.

He also pays due recognition to his German-Jewish heritage in ‘Fire-Voices’, a meditation on religion and irrational, genocidal hatred, and ‘The Afterlife of Dietrich Bonhoeffer’, the German Lutheran pastor hanged by the Nazis in 1945.

The second section of the collection, ‘Love and Fairy Tales’, allows Adam Horovitz to escape the past, and write lyrically about contemporary love and lust. He describes love as “that old anarchist”, that “upsets apple carts”, breaks hearts and rekindles old desires in ‘A Rose By Any Other Shape’.

His lyrical mood continues in ‘There’s a Music’, when sounds in his head come from “the friction of living: birdsong; the passage of lights at a certain time of day; the first touch of another’s skin”.

There are well-observed and down-to-earth natural images in ‘42nd Dream of You’ that are reminiscent of Cider With Rosie:

ripe with the aniseed scent

This should not be surprising. Horovitz was raised in the same heartland of Gloucestershire as Rosie’s companion, and has written a memoir titled A Thousand Laurie Lees. A sonnet, ‘Seed and Stone’, again uses natural images to describe love … “we wake tangled up like reeds / in the ploughed, water hollows of the bed.”

A relationship conducted at a certain distance is twice viewed from a railway carriage:

breath crazed on the carriage window

into a ghosted close-up of your face

(‘To Be Read Looking Upward over Water’)

A last sight of you

sea of a grubby railway window

gives you a flavour of it. Abandon yourself to the vowels!

In this rich and varied collection Adam Horovitz has displayed his poetic versatility, recognising his family’s past while also asserting his right to live in and celebrate the magical qualities of the present.

A new Write Out Loud night - in Worcester tonight! ►

What a lovely review - quite moving, I found - of what sounds a vital book.