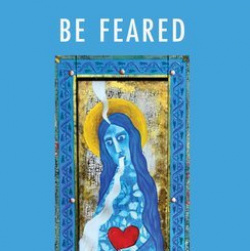 The poems featured in Be Feared trace a challenging and at times fearful journey towards self-awareness and liberation. The poet is the hero, or better the heroine, of this journey that is a relentless revisitation of her past traumas in an attempt to build a fairer future. Compelling imagery overflows in Burn’s verses, defying traditional narratives and creating an alternative language that expresses her feelings freely. Some of the poems in the collection have won prizes or have been highly commended in competitions; others have been published in various magazines. Her work has been nominated for the Forward and Pushcart prize as well. Burn is also an illustrator; she is based in the north-east, is from a working-class background and had a late diagnosis of autism.

The poet’s self-discovery reveals a process of transformation in which she finds her voice, alternating wild prayers and rebelling words in an honest language that has outrageous undertones. The rhythm of her lines is captivating and expresses a relentless dance of survival:

O keep us from the lure of dust

forgive this    hankering for distant lanes

give us    brave     archangels of morning sun

I saw the birth of a crazy phoenix – saw it raise hackles of fire,

span bright wings of pain, sear the night with a flock of sparks.

(‘Self-Portrait as an Inferno’)

References to myths and fairy tales are subversive too, and reveal a different interpretation that reverses the narratives and challenges traditional stories:

I am Rapunzel in her tower with her hair already shorn,

or Sleeping Beauty, pricked not by a spinning needle

but by some more poisonous thorn.

I am Cinderella but my slippers are not glass –

they are rusted iron shackles locked

so tight no key can pass.

Thus, fairy tales do not have a happy ending. Reality is tough and the journey towards recovery is hard and troubled. Burn’s rewriting conveys a down-to-earth vision that leaves no space for illusions and describes a realistic and personal experience. She fights to recover from her past traumas that involve bullying at school and domestic abuse. Pain still emerges from time to time in broken lines where darkness seems to prevail:

(‘So you made a thousand shit decisions’)

However, the natural vitality of Burn’s images renews hope and overwhelms the pitfalls and the bleak atmosphere that sometimes seem to win in this poetic quest for a more equal and impartial representation of the self.

The sequence of the Snow Queen describes a world frozen in pain in which transformations are denied. The self is shattered like the mirror of the story, a recurring theme in Burn’s poetry that acquires multifaceted meanings. In this eternal winter the risk of self-erasure and therefore suicide is a dangerous presence that menaces survival and renovation:

its roots into the citadel of buried bones, the rose who knew

of blood and thorns, the rose who stood against the sky

like an open wound, said we could not taste him in the earth.

However, the vitality of the overflowing imagery and inventiveness of Burn’s verses guarantee a continuous change; it is a movement that allows new developments and therefore life. Her yearning for love and for fulfilling relationships finds new hopes in her love for other women:

I see her nape, her figments of knucklebone,

her hair. As dusk swapped its dilute for dark, I walked from the room

It is the discovery of a new world that opens the poet up to affection, emotional involvement and the pleasure of ordinariness, that is, of doing things together. Sex tastes sweeter than she had thought it would and uncovers new, surprising horizons she would not have imagined before. In the reconstruction of her shattered self, Burn revisits her past memories and she experiences transformation through storytelling and poetic language, she finds her renewal and regains her power as an independent individual and as a woman.

◄ The gift of poetry: pharmacy swept off its feet with orders after mention in Christmas gift guide