The Bicycles of Ice and Salt: Jean Atkin, Indigo Dreams 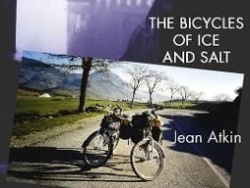 Her first journey took place over 10 months from October 1980 to August 81, “in which we pedalled into winter, with hardly any money, down the east side of France, later across Italy and back up the west and north of France to Boulogne – nearly 5,000 miles. A very slow and eccentric Tour de France.”

The two young women were semi-prepared, buying Richard’s Bicycle Book, “the one that told you how / to kill a dog with a pump.” But one stanza makes you wonder at their bravery and/or naivety:

We bought nothing that explained

how to travel through the world of men.

We weren’t streetwise. We had to learn

how and when to lie.

One night they hear footsteps and the voices of more than one man circling their tent. They clutch penknives, “meant to use them”, before silence falls again. Other men are more welcome, such as the young man who strolls over a footbridge and places “a jar of honey in my hands” (‘Miel de Pays’).

The first journey begins in eastern France in an autumn “so bitter / the bicycles grow ice in their chains.” (‘The bicycles of ice and salt’). It’s the season of apples and pears (sometimes stolen), cold farms “hung with hoar frost”, sweet chestnuts, one farmer drying cannabis leaves in a barn, the onslaught of leaves as they try to negotiate a gale. Atkin reflects on and concedes their lack of foresight:

We didn’t so much plan, as bolt.

out of England, out from under

everything. We didn’t even know

all the things we didn’t know.

‘Real at last’ is about the trip teaching them “a culture of fire”: “I start / to hunt red courage of the road. / … and death is real and risk is real at last.”

Her blogpost says: “Seven years later I persuaded my partner Paul to set off by bicycle, into winter, with hardly any money, south through France then around the coastlines of Spain and Portugal, returning to Britain from Santander in March 1988 – again, nearly 5,000 miles.”

On this later trip, sharing “exhilaration / at the downtilt of a pass”, men are harvesting olives by beating the trees with sticks; a terrified dog is tied to a road sign on a roundabout; monasteries and statues provide a sanctuary of sorts amidst the road-trains that trap them in the gutter. Meanwhile there are small, intimate moments: a kiss on the edge of cliffs, cutting each other’s hair.

The dedication is to “Shona, and seven years later, Paul, very dear companions of two long winter journeys by bicycle, long ago”.  This delightful, detailed account of those journeys, with vivid descriptions of places and people, has a flavour of Stevenson and Hemingway on their travels. Jean Atkin these days “maps memory, human experience and place”. We must be thankful that she survived those occasionally hair-raising adventures unscathed, to tell the tale.

Jean Atkin, The Bicycles of Ice and Salt, Indigo Dreams, £6.50

Sounds like a real treat for this longtime cyclist. My order is in!
MC