The world is a stage, but the play is badly cast. 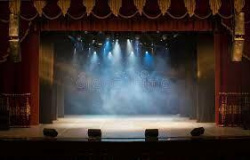 "Hello Blake," said a man dressed in a Chicken suit with a mask.
"What brings the Masked Chicken to the morgue?" Asked Dr Blake Alexander the local coroner.
"I need info for a case from my source in the morgue," said the Chicken.
"So this isn't a social visit," said Blake.
"No," said the Chicken.
"You shouldn't be in here," said Blake's Assistant, Dante walking in the room.
"Dr Alexander is very busy don't disturb him," Dante said dragging the Chicken to the door.
"Why are you so pushy?"  The Chicken asked trying to stand his ground.
"You will only cause problems," said Dante.
Blake wished he was as abrupt as Dante telling the Chicken his mind but he was too nice and polite to do that.
"I will not!" said the Chicken, "I am a superhero."
"No we are!" said Dante telling the truth, "The Angel and Blue Midnight you are just serial victim and pest we save you"
"Goodbye I'll find someone more helpful," said the Chicken said storming off.
"Thanks for getting rid of him Dante," said Blake smiling.
"Get back to work you have work to do," said Dante.
"I'm your boss remember," said Blake returning to work knowing he wouldn't win.

"Hello Lance can you help me?" asked the Chicken later in a nearby newspaper headquarters.
"I'm a little busy now Chicken," said the reporter Lance Alexander, Blake's adult son.
"Lance where is your article about the death of the Necromancer's latest victim," Orlando King Lance's boss said walking up to them.
"I am still writing it?" Lance said.
"I need him," said the Chicken.
"Go away bother  someone else!" Lando thundered.
The Chicken reluctantly left.
The Chicken visited a teenaged boy at school he was his best friend Lance Alexander Junoir Lance's son.
"Hi Prince of Darkness," said the Chicken seeing the boy who was an emo goth.
"Gabriel go away you aren't allowed on school grounds," said the prince who looked like a vampire but wasn't.
"Do you know that chicken?" asked the principal seeing them.
"Yes, he's my ex-girlfriend's dad," the prince said.
"she died right," the principal said,
"she was murdered," said the Chicken.
"I am sorry to hear it," said the principal, "He  is not allowed here as a non-parent."
"Bye Gabriel," said the prince.

The Chicken was getting desperate for help he went to his worst enemies' home.
"Hi Vampire King," said the Chicken at the door of the Queen and King of vampires.
"Hello Chicken Is anything wrong?" asked the king.
"You are still are alive that's wrong!" said the Chicken slamming the door in his enemy's face. He didn't want to ask for help from him. He stomped off knowing he would not get any help. So he gave up his errand of stupidity.

◄ Bad Omens or the insane unfortunate ravings of a mad chicken