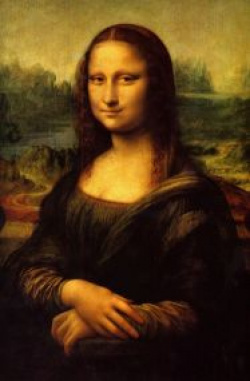 Leonardo held on Mona Lisa. It became the property of the French people during the French Revolution, 1787-1789.

The three-quarter view of Mona Lisa broke from the standard profile pose.
In 1911 Mona Lisa was stolen from the Louver.

During World War Two Mona Lisa was evacuated to various locations in the French countryside.

In 1809 cleaning and re-varnishing resulted in a washed-out appearance to the face of Mona Lisa. Great care has been taken not to further damage the painting

Da-Vinci code is that Jesus married and bore children with Mary Magdalene.