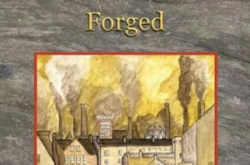 I’ll be honest. My heart sank when I first glanced at this pamphlet. It appeared to be another elegy for the Black Country and its industrial past, and it just feels as if I have read a few of these.

How wrong I was. For a start, Tina Cole does capture the Black Country well, as in the opening prose-poem ‘Heirloom Landscape’:

Moreover, on a second glance, I appreciated that the Black Country is a backdrop; that these poems are about more than that, the stresses and strains of family life over generations. In another prose-poem, ‘Nothing but the Strength of Names’, Cole sketches out three women that “mothered” her - her great-grandmother, grandmother, and mother. In a few terse but vivid phrases she tells stories of hard lives … “thirteen children later … war took seven sons.” A casualty of a second war,  “just a body cradling its shrapnel, slipping away in blood and splinters.”

by the certain wisdom of shallow pockets,

kids with hands and hair unschooled

Maybe I always understood her need

what she could not afford, settle for compensations

There is tenderness in ‘Hairdressing and Storytelling’, “her balding scalp pink as a cat’s underbelly.  …  I plait tiny heart-shaped / skeins, press her to my skin.” A bizarre family tale recounts how an ‘Austin 1100 1970’ was bought but kept within the garage, where it “rusted from underneath / guts spilled out // flat tyres and oil slicks /sighing into concrete.” ‘Makeovers’ is a wistful portrait of her parents as they might have been, urging them to “laugh in the face of it all”.

That feline image reappears in the poem ‘Intensive Care Unit’: “When no-one is looking / death curls inside my mother / like a cosy cat.” ‘Last Day at Number 62’ records the ritual of a final goodbye to an old family home full of rueful memories:

The ghost of mealtime

‘When We Meet Again’ returns to the three mothers: “I will know your shadows … grainy ghosts beside a damp fire, kettles boiling, cursing fate, tempers on overload”.

This is no rose-tinted recollection but a family history that is nevertheless affectionate and charming, and feels satisfyingly complete. The pamphlet is complemented by a delightfully sooty cover design that is green at the edges, by Lorna Faye Dunsire.

Poets for the Planet at UN climate change conference in Glasgow ►