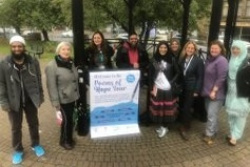 Batley and Spen MP Kim Leadbeater, who is the sister of murdered MP Jo Cox, joined Batley Poets when they delivered Poems of Hope at the Green in Heckmondwike and Batley market place, West Yorkshire, as part of National Hate Crime Awareness Week.

Kim said on Twitter in the aftermath of the murder of Conservative MP Sir David Amess in his constituency in Leigh, Essex: “I wasn’t at all sure what to do today, but attending the Batley Poets ‘Poems of Hope’ felt right. Such powerful messages and brilliant performances. Thank you.”