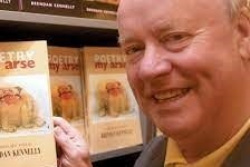 Tributes have been led by Ireland’s president after the death of Brendan Kennelly, who was described by the Irish Times as one of the country’s most popular poets, at the age of 85.

Kenelly was being cared for at a nursing home in Listowel, Co Kerry. He had not been well since a heart bypass operation, retiring from Trinity College, Dublin in 2005, and later moving from Dublin to be with family in Kerry.

President Michael D Higgins, himself a poet and a friend of Kennelly’s, said his poetry held “a special place in the affections of the Irish people.

“As one of those who had the great fortune of enjoying the gift of friendship with Brendan Kennelly for many years, it is with great sadness that I have heard of his passing,” he said. “As a poet, Brendan Kennelly had forged a special place in the affections of the Irish people. He brought so much resonance, insight, and the revelation of the joy of intimacy to the performance of his poems and to gatherings in so many parts of Ireland. He did so with a special charm, wit, energy and passion.”

He added that Kennelly’s poetry is “infused with the details and texture of life, its contradictions and moments of celebration including the wry experiences of football and politics”.

Born in Ballylongford, Co Kerry, Kennelly was professor of modern literature at Trinity College, Dublin for over 30 years, and retired from teaching in 2005. He published over 30 books of poetry, but was best known for two controversial poetry books, Cromwell, published in Ireland in 1983 and in Britain by Bloodaxe in 1987, and his epic poem The Book of Judas (1991), which topped the Irish bestsellers list.  His third epic, Poetry My Arse (1995), could be said to embody certain qualities in his poetry - scabrous, down-to-earth, and colloquial – as well as his attitude to poetic language.

Kennelly was also well known as a broadcaster and made many appearances on Irish radio and television programmes, such as The Late Late Show.

Journalist and author Fergal Keane described him as a "great poet and family friend". He said on Twitter that Kennelly's 'My Dark Fathers' was "one of the greatest Irish poems".

His publisher at Bloodaxe, Neil Astley, posted this video of Kennelly’s poetry

'You see only what you want to see. Maybe you always did.' ►