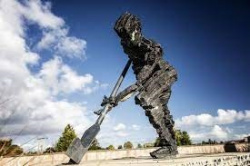 The links between the poetry of Seamus Heaney and his Northern Ireland landscape have been made more accessible to visitors. Open Ground, a series of five locations which held great significance for Heaney, are listed on the Seamus Heaney HomePlace website. The locations are at Toomebridge, Magherafelt, Moyola River, Lough Beg and Bellaghy Bawn.

The Strand at Lough Beg

Heaney’s eponymous poem takes its name from a place where his family’s cattle once grazed. Heaney remembered visiting the Strand with his father at the end of the day to check on the herd. Lough Beg is a wetland nature reserve, with wildfowl and woodland birds.

The lowland clays and waters of Lough Beg,

The fields at Mossbawn, the family farm where Seamus Heaney was born and spent his early years, ran down to the Moyola river, just half a mile from his front door. The young Heaney would walk along the river to the stone arches of the railway bridge at Castledawson. The poem ‘A New Song’ recounts time spent by the water.

Sunk in the fjord, the shifty glaze

Of the whirlpool, the Moyola

The Turfman at Bellaghy Bawn

One of Heaney’s best-known works, ‘Digging’, compares digging turf from a bog with the poet’s own labours when writing. It recalls a visit to Heaney’s grandfather while he was cutting turf on Toner’s bog. The poem and the practice of cutting turf are honoured by David Annand’s sculpture The Turfman, pictured. Sculpted in turf then cast in bronze, the statue stands at Bellaghy Bawn.

Over his shoulder, going down and down

For the good turf. Digging.

– ‘Digging’, Death of a Naturalist

Seamus Heaney became fascinated with eels and eel fishermen when he began visiting his wife Marie’s family at Ardboe, on the shores of Lough Neagh. He took inspiration from the Eelworks at Toomebridge  – the most productive wild eel fishery in Europe – for his poem ‘A Lough Neagh Sequence’. You can visit the gates where the eels are harvested, and Malcolm Robertson’s sculpture capturing the migration between Mid Ulster and the western Atlantic.

At Toomebridge where it sluices towards the sea

They’ve set new gates and tanks against the flow.’

– 'A Lough Neagh Sequence', Door into the Dark

The nearest town to Seamus Heaney’s childhood home, Magherafelt and its amenities are regularly evoked in his poems. Doctor Kerlin, who visits the Heaney home in ‘Out of the Bag’, had his practice on Broad Street. Magherafelt’s cinema is recalled in ‘Two Lorries’, as is the bus station where Heaney met his mother when returning from school at St Columb’s College in Derry. Heaney juxtaposes this meeting with the 1993 bombing of the bus station, which was also a stop on the poet’s bus journey in ‘Route 110’.

A revenant on the bench where I would meet her.

In that cold-floored waiting-room in Magherafelt