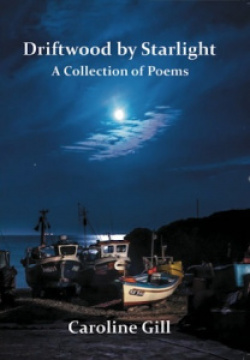 Prize-winning poet Caroline Gill, who currently lives in Suffolk, grew up in London, Kent and Norfolk. After graduating in classical studies at Newcastle University, she went on to teach Classical Civilisation in secondary schools and then spent some time teaching English as a foreign language when she lived for a while in Rome. After Rome, she and her archaeologist husband, who is also a poet, lived for many years in Wales.

Having resided in so many different locations, it is hardly surprising that Gill is very much a poet of place. There is a strong Celtic connection in her writing which centres on a number of specific places in Scotland, Wales and Cornwall. Many place names appear in her titles: Dunwich, the isles of Skye and Lewis, Zennor, Penwith, Preseli, Rhossili and Mên-an-Tol, a small formation of standing stones near Penzance. Cornwall has remained a constant point of reference and source of inspiration to her with its mysterious tales of smugglers, wreckers, mermaids and the court of King Arthur.

Many of the poems in this collection are set in coastal areas. Thanks to Gill’s keen observation and attention to detail we can almost hear the scrunch of shingle underfoot and smell the brine from the sea.

A number of poems, such as ‘Raft Race,’ ‘Weddell Seal at the Ice Edge’ and ‘Puffin’s Assembly’ express concern for wildlife in our increasingly fragile environment. The latter is cast in the manner of a board meeting, an Aristophanes convocation, an agenda that Gill uses to good effect to put her message across:

Flutter round me, global friends:

the ocean wails beneath our wings.

I sense its brooding grief.

In time we shall be hardly more

than hearsay about ‘ancient things’.

And if we vanish,

we will lose our names, our very selves.

What is at stake here is their survival.

‘Wildfire,’ which is prefaced by a quotation from Pliny to Tacitus referencing the eruption of  Vesuvius, has an all too familiar ring about it, taking into account the wildfires that have swept through Australia, Greece and America in recent times. ‘Monte Testaccio, Mound of Potsherds’ is Gill’s nod to archaeology and her time spent in Rome. In among the discarded amphorae dating from the time of the Roman empire, Gill weaves a poem that takes in the resting places of Shelley, Trelawny and Keats, and brings the past alive again by playfully naming the cats that roam there - Cestius, Mark Antony and Cleopatra. Her conclusion is that “Testaccio crowns the centuries, / for cats have perfect taste.”

Other poets inhabit this collection to one degree or another. There is an elegy for Idris Davies and there are references to Dylan Thomas, Edward Thomas and, in his role as a translator of Homer’s Odyssey, William Cowper. There is also a very fine sonnet about the celebrated Cornish fisherman and artist Alfred Wallis “who painted waves of slate, / felt squall and tempest pulsing through his tones; / in time his ships would surface in the Tate.’

Many of Gill’s poems incorporate form. ‘The Figure at the Phoenix Mine,’ for example, is a sestina which was awarded first prize in the general section of the international Petra Kenney poetry competition and ‘Postcard from Bracelet Bay’ is a fine example of a specula (mirror) poem where the second stanza repeats the first, but in reverse order. ‘Et in terra pax’ inspired by a window in the Loretto school chapel – Scotland’s oldest boarding school in Musselburgh - for the centenary of the 1914 Christmas truce, and letters from first world war soldiers, takes the form of an acrostic sonnet. ‘Moonshine’, a poem about a snowy owl that lands in Cornwall, is a visual poem whose lines mimic the wingspan of an owl in full flight. I was privileged to be present when Gill read this poem at the Swansea international poetry festival in 2011. She invited the audience to join in on the first word, which meant that we were called upon to make the noise of the owl as it passed by close to our ears: Whoosh.

It was not until I read this collection for a second time that I began pick up on Gill’s fascination with stones. She listens to them and is utterly captivated by them. In between these pages there are “logan stones [that] rock from their precipice height”, “dolmens that rise out of the heather” and “boulders and giant-sized capstones”.  In other poems there are references to the “cheesewring” (a granite tor on the eastern flank of Bodmin moor), a holed stone at Mên-an-Tol, ‘Robin’s Rocks’ (an area on the north coast of Cornwall), a finger stone (milestone) at Penwith, and the blue stones of the Preseli mountains.

These poems will resonate with all who appreciate wildlife, coastal scenery, local history and classical antiquity. Gill’s infectious joy for the natural world and her deep concern for its preservation makes her very much a poet of our time.