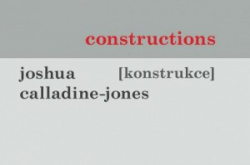 This impressive debut pamphlet by Joshua Calladine-Jones features three sections that question the very roots of how we use language and proposes different ways of communication. This might entail making grammatical mistakes and the deconstruction and reconstruction of discourses as part of a creative practice as well as distortions of famous poems and alternative methods of translation that deviate from the original. Different procedures reveal new possible angles from which to see objects, describe situations and deal with words.

As Calladine-Jones remarks in ‘On Constructions and Distortions’, an afterword of sorts, “words have a habit of surfacing inexplicable objects”; these objects have “infinite numbers of variants” and are “objects in flux towards the infinite”. Thus, distortions and constructions suggest possible meanings that the poet explores. These meanings and/or interpretations are conveyed in an experimental kind of poetry that is inspired by videoconferences and the use of digital technology during the pandemic. Translations and re-translations are also deftly developed in an intentionally distorted way that highlights a shift of meaning.

Language is the main focus of these poems, a language that shapes reality, communicating sorrow, pain and the uncertainty of our human condition but also hope in possible different reconstructions. The word construction and the Czech translation konstrukce evoke both a physical composition or building and the artificiality of our linguistic constructions. In this perspective, the online conversations that inspire the first section report the use of English of second-language speakers. Their grammatical faults and misspellings reinterpret the language, revealing their personal translation from their mother tongue; this practice reveals a multi-layered view that allows controversial and often opposite paths. The communication is effective not in the sense of precision or adherence to reality but in its openness to different angles:

It can be personal problem,

it is easy to dissipate, disappear.

One of our way was to Dead Sea,

we saw, and we could swimming,

and all we could see the dead.

I was thrown to the water again.

Now I’m back with the light.

This is the second time

It’s only internal, okay. My words

are not always so good, and I even don’t want,

because its so fragile they have to put chemicals to it.

The fragility and unpredictability of language reflect our human condition. These conversations are unsettling; they convey a sense of displacement .Second-language speakers are able to communicate but make mistakes that imply difference. This difference is not considered a diminishment of language but an enrichment, and it allows new perspectives and possible changes.

The second section, ‘Distortions’, focuses on the process of translation and revisits some famous poems, such as Shelley’s ‘Ozymandias’, Wordsworth’s ‘Daffodils’ and Keats’s ‘Ode on a Grecian Urn’. The changes are intentional, ironic and thought-provoking. As Callandine-Jones explains, they are a “distortion of the Romantic ideal” and they follow some basic rules that imply deviations from the original, the use of approximate words, and possible misspellings and alterations. Nevertheless, according to him, it is important to maintain the style and poetic form that never fail in these poems.

Loneliness and isolation are recurring themes that are connected to the effect of the pandemic but also seem part of our human condition and are perhaps a choice. The minute description of the landscapes he encounters highlights a loneliness that looks like deprivation at times; it is a scenery in which people struggle to survive and finally reinvent themselves. This fragmented and disseminated condition does not seem to have a definite goal. The poems cleverly insist on ramifications and displacement, proposing an approach to reality that reveals the constructed sides of our language and the destructive potential of the process of poetic creativity. It is a compelling and challenging point of view that attempts to recreate our approach to language and our vision of the world around us.

'We take on trust the dead are buried and gone' ►