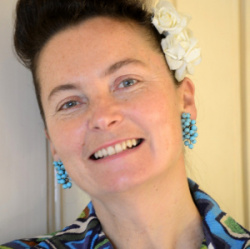 A poem about sea swimming by Katrina Naomi, ‘in the kelp forest’, has won this year’s £1,000 Keats-Shelley poetry prize. Katrina said the winning poem was part of a series “written in response to daily swims, over the last year. I love sea swimming, I go first thing in the morning. I used to be scared of swimming through the kelp; I'm learning to enjoy it."

Judge and poet Deryn Rees-Jones said: "The form of this poem, with perfectly positioned breathing (and perhaps thinking) spaces, allows us to explore an underwater world. There is something melancholic about how the speaker positions herself, knowing perhaps that to join the kelp would be to surrender her human life. But the poem also asks how we connect with the richness and difference of the world, and how we know and open ourselves in knowing it."

Katrina's third collection, Wild Persistence, (Seren, 2020) received an Authors' Foundation award from the Society of Authors. Her poetry has appeared on Radio 4's Front Row and on Poetry on the Underground. A poetic collaboration with Helen Mort, Same But Different, is published this month with Hazel Press.

in the kelp forest

the first time she finds herself     among brown strands

dank silence     beyond her breath     the gentle murmur of

the lab     but keeps her Dutch colours     sliding her mind

part translucent    part shine    like nothing else but kelp     her

restless hair goes on its own pulsing journey    she forgets

welcome   displays its tentacles   as she refuses neoprene

a strange fish for sure      but one who could belong

The Young Romantics Poetry prize was awarded to 18-year-old Eustacia Feng from Shrewsbury for ‘A Craftsman's Tale’. Eustacia said: "I have always been absorbed with the idea of timelessness in Romantic poetry. And through this poem, I want to convey how humanity is eternal because of its very simplicity."

Judge Will Kemp described it as a “effective and imaginative poem with rich imagery and variety by an accomplished story-teller with a keen eye for detail and an ability to thread a neat narrative between an engaging opening and a confident ending”.

I used to own a star strewn sky. I could hollow tales

Out of a craftsman’s eye, and draw his sorrows

With a pail out of a haunt well, filled with darks

And distortions and echoes of fruit-flies. Hislimp

Told his glories in war, or his chivalrous battles

For his fairy bride, or a venture afar,onto the peaks

Of the Himalayas, where he tiptoed to glean

From the moon’s surface,a speck of dust,

Gossamered with legends from lonesome times,

And hid it in his trouser pocket for his sweetheart.

Each night I lay under the heaven, and with a misted gaze

I picked the brightest stars and scissored them out

And sewed them together with other evening fires; or knelt

Just below the waterline, in search of the dreamiest lustre

A pearl could shine, and gathered all of them and piled them

Into a stream of diamond rays, with crystal reeds and eddies

And fish sculpt in ice. But as the sun hovered past,

Those scenes smoked away,till all that remained were

A piece of paper and a pencil stump. And I seemed to see

More to suffering,than a tear from an aching eye.

Away from the glow worms, exhaust smokes vex the night.

From the aquarium-like houses, there stare

Grins and grimaces and vacant brows.

A splat and a clatter, as the mother squashes a fly.

The father slamming the door, it takes twice to have it shut.

An array of dirty dishes, as the hosepipe goes

The Keats-Shelley Essay prize was won by Nicola Jackson for ‘Moving shadows: the influence of John Keats on the poetry of John Tyndall’.

The Young Romantics Essay prize was awarded to Finn Smyth age 19 from Fife for ‘Touchstones of the Heart: The Progress of Keats's Suffering?’.

The Keats-Shelley Poetry & Essay Prizes 2022 will open for entries later this year. The poetry theme will be 'Elegy' which takes its inspiration from Shelley's 'Adonais', marking the bicentenary of Percy Bysshe Shelley's death in Lerici, Italy on 8 July 1822.

The Keats-Shelley Memorial Association (KSMA) supports the Keats-Shelley House in Rome, where John Keats died in 1821. The KSMA purchased the house in 1906. Over the past century, the KSMA have transformed the first-floor apartment into a museum and library dedicated to the Romantic writers, above all those - Keats, Percy Bysshe Shelley, Mary Shelley, and Lord Byron - with strong attachments to Italy.

The KSMA is also responsible for maintaining the graves of Keats, Percy Bysshe Shelley, Joseph Severn and Edward Trelawny in the non-Catholic cemetery at Testaccio.

Keats-Shelley 200 is marking the bicentenaries of Keats's and Shelley's deaths in 2021 and 2022 with a programme of initiatives, exhibitions, scholarships and events in the UK and Italy starting in 2021.​​ Keats-Shelley 200​ ​focuses on the final years of the lives of both poets and includes celebrations of the bicentenaries of major works and events, such as Keats' arrival in Italy​ and ​the publication of Shelley's Adonais​, as well as the poets’ deaths within 18 months of one another in Italy.