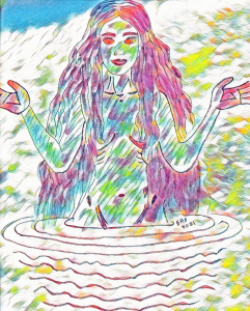 Lilith, first wife to Adam. She refused to be submissive to Adam, God or his Angels.

She chose to live freely. She was turned into a Demon for disobeying God.

Known as stealers of Babies and seducers of single Men.

Many talismans bearing the names of the Three Angels who tried to force Lilith to return to The Garden of Eden have been found. This is to ward her off from stealing or killing newborn Babies.

The Bible only mentions Lilith once. She is known to be a dweller in waste places.

Lilith, the most notorious Demon in Jewish Mysticism.

In modern times people have began to look at Lilith in a sympathetic light. She was unfairly treated.

She has become an icon of freedom. Women who wish to live life free of sexual repression or want freedom of will have embraced her.

Some people worship her as a Pagan Goddess of Women.

Folk tale or mysticism you decide.

Thank you John. I don't write poetry too often anymore. If you would like to see more of my writing check here.

I didn't know of Lilith, Shirley. You tell this well and have whetted my curiosity to research it further.
And, by the way, it's good to see you back on this site again.