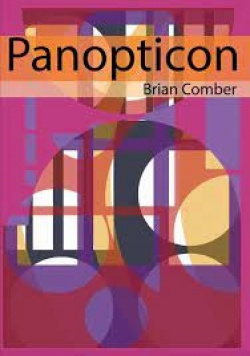 The title of Worcestershire poet Brian Comber’s debut collection made me reach for the dictionary. Historically, a panopticon was a circular prison with cells arranged around a central tower from which prisoners could at all times be observed. It is also the name of an optical instrument that is a combination of a telescope and a microscope. I can’t help thinking that in an age of digital surveillance, it may have a more sinister shade of meaning.

In the preface to this collection Comber says that there is no unifying theme that binds the poems together. He tells us that “some arrived almost fully formed whilst others changed shape through numerous edits”. He hopes that they will “entertain, surprise and, to some extent, unsettle readers”. These are well-chosen words because the book does just that on all three counts.

In the absence of lengthy linear narrative, Comber offers the reader snapshots of activity. Part of the surprise element is down to the fact that he never lingers for too long on any one incident but moves on to another which might or might not be related. In many poems we are told half the story and left to fill in the rest. I find this tantalising because it fuels the imagination. That said, not all these poems worked for me. For example, after several readings, I am still trying to fathom the significance of ‘The Comfort of Horses’ and ‘The Fourth Wall’.

One of my favourite poems in this collection is ‘Hypnopompia’. Comber intrigues us with its dreamlike quality as we hover between sleep and our waking state:

Push into a familiar room in another country or time

with people who speak behind glass

and move on, leaving pools of friable air,

like two carriages pulling apart into the machinery of the morning

with a stubborn sense of unplaced wrong,

or of something vital left undone.

Another favourite is ‘Hygge’ (a Danish word suggestive of a mood of cosiness and comfortable conviviality with feelings of contentment). The poem’s mood is tantamount to that feeling you get sitting in the warmth of your own home when the temperature outside is well below freezing.

What I want is snowfalls across Europe, seeing

families check texts at airports. I want to hear

under the pressing weight of aircraft turning in the stack.

I want lines at check-ins, the bewildered losing their cool

and the compacted scrub of the apron banked up

waiting for the plough,

with the continent stalled.

In ‘The Second Law of Thermodynamics’ Comber gives a depiction of a town that has lost its way. In keeping with the title, it has run out of energy and is degenerating into a more disorderly state. Comber’s opening lines capture the theme with concision:

The town idles, out of gear, rocked by passing lorries,

whereas the one down the valley

has a science park and a festival, why them, not us?

There may be “no unifying theme” to this collection, but Comber’s imagery is consistent enough to bind everything together. For example, the state of the weather is often presented as a means of setting the mood: whether it is “a storm surge” (Hypnopompia), “weather fronts driving in from the west” (The Second law of Thermodynamics) or “snowfalls across Europe” (Hygge), it often forms the backdrop. Surprisingly, for poems coming from a landlocked county, the sea is another backdrop. Ships, tides, oceans and fish put in more than an occasional appearance. With regard to the ‘unsettling’ elements, violence is the natural order. It flares up out of nowhere in the form of stray shells, landmines and mortar attacks.

If you are looking for something that is refreshingly different from the mainstream and enjoy a challenge, then this promising writer has much to offer.