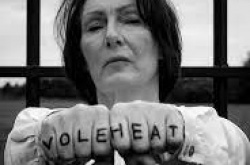 Perhaps the most important poem in Laura Taylor’s third collection is not the title poem but ‘Origin’, which precedes it in the book. This poem employs remarkable, un-everyday words such as “prephonation”, “glossolalic”, and “morphemes” – which could be said to be the building blocks of language, in their different ways – in a poem about learning to put ideas and thoughts into words:

I did not suck my thumb.

and learned to work the motors of the muscles

in my head; masticating syllables,

exorcising scribbles made of air and formless urges;

and spitting out bubbles just for fun, in between.

After that, ‘Speaking in Tongues’ is a mission statement of affirmation, a refusal to be pigeon-holed, to be slapped down, to be categorised by class:

for your own good

that it was not for me,

Must you question everything?

These are two rare poems about herself. For this is a poet that you rely upon not to spend too much time on introspection, when she could be drawing attention to all the wrongs in the world instead; thumbing her nose at bigotry in ‘In Plain Sight’, seeing birds as “silent migrants” in ‘Plump’, and listing the attitudes that accompany the statement ‘I’m Not a Racist But …’ in a long poem:

Stop being so offended!

And I’m not being funny but

My best mate is black,

to try and justify

‘A Capital Demand’ is another long poem that exemplifies very much what Laura Taylor is about, as she lists all the obstacles and hurdles facing low-paid care workers. ‘Frogs and Snails’ concerns the little-discussed but growing prevalence of ‘family annihilators’, men who kill their own children and often their wives, too; ‘Invasive’ refers to the grooming of teenage girls, as well as the ‘digital strip search’ disclosure requests that rape victims face during legal investigations; ‘The Ties That Bind’ attacks the stereotyping associated with misogynistic labels.

The ‘World-Beating Corona Suite’ covers the multitude of things we experienced or were deprived of during the pandemic lockdowns. ‘Salvation’ celebrates love and sex; there are poetic swipes at Boris Johnson and Matt Hancock (who was he?); ‘True Colours’ and ‘Long Division’ take anti-maskers, anti-vaccers and conspiracy theorists to task; ‘Mutations’ is a short, clever poem repeating the same words over five lines but italicising a different one each time, before leaving one word out on the final line.

The humour in Laura Taylor’s work should not be overlooked. For example, there’s a wry take on ageism and the invisibility of elders, especially older women, in ‘Bank Robber (Me Granny Was),’ after the Clash:

Me granny was a bank robber.

She never hurt nobody.

But no one could describe her face

‘Stronger When We’re Poor’, imagining Harry and Meghan on their uppers and living in poverty, is a good laugh, too.

There are poignant memories of her seaman father in ‘Login*’ and ‘The Last Shanty’, while ‘Unconditional’, ‘Beatitude’ and indeed ‘Mavis’ are tender love poems. ‘In the mirror is an ocean’ is a rare flight of lyrical fancy which the poet is capable of, and adept at. I would like to see her take flight in this way a little more often.

Meanwhile, how has she coped as a performance poet during the pandemic without real, live performances? She has undoubtedly missed appearing at live venues such as festivals. How much has she missed it? In ‘Streaming’ – part of a sequence of Covid poems titled ‘World-Beating Corona Suite’ – she points out that online alternatives don’t make up for the loss:

I cannot cast my words

upon a sea of bobbing heads.

No sound coming back to me;

A blank of gasp and chuckle

I have no mic to push and pull,

to shake, or paint with venom.

(We published this poem on Write Out Loud last year, when Laura wrote an article for us on the subject).

Many of the poems in Speaking in Tongues bristle with Laura Taylor’s fire and anger, and you can imagine her delivering them a festival somewhere, prowling about the stage.  But passion like that can successfully transfer to the page – and in her case, it invariably does. When reading some of her poems you might inadvertently flinch, but in a good way. There are no soft options, no evasive answers, and there is no looking away in Laura Taylor’s world.

◄ 'The intimacy of the poetry world': TS Eliot judge Fiona Sampson on the selection process

If you've not already got yourself a copy, get in touch and I can send you a signed copy if you fancy ?

Looking forward to reading this. 'Origin' was a fascinating poem.