'I wanted a real live reacting audience ... live streaming isn't the same thing at all. But now I've been converted to the potential of online gigs'

The Covid19 pandemic lockdown has hit live performance hard. Venues and artists have suffered loss of incomes, gigs and festivals have been cancelled, and book and album launches have had to be deferred. In order to try and mitigate some of this, many festivals and gigs decided to make the transition to the virtual space.

Like many performance poets, I had a string of dates already booked in for 2020. It was going to be a great year, I was really looking forward to being back on a stage after the winter break, and back in festival fields again, gigging and partying all weekend, but this was not to be. The virus changed everything pretty much overnight. One by one, cancellations began pouring into my inbox and dates crossed off the calendar, until nothing was left. I had a fistful of brand new poems that I had honed, new props to play with, a new book lined up to promote them, and some pieces were topical, so ideally needed to be gigged this year. It was like running right up to the start of a race, and then stopping abruptly.

Within a short amount of time, however, the concept of live streaming took hold. A plethora of open mic nights took to the internet, and virtual gigs and festivals began springing up everywhere. Audiences were going mad for them. Gigs streamed straight into your living room, where you could have a beer and watch your favourite band or poet for free without having to leave the house. What more could you want? Well, speaking as a performer, I wanted a real live reacting audience, who laughed, cried, heckled, applauded, bought books or albums, wanted to chat with you after the gig, and sometimes become real live friends! And let us not forget real live payment too, for the hours of work put into the creation, the learning, and the perfectly-honed delivery of those poems. All of these things were missing, and I can speak for every single artist when I say live streaming simply isn’t the same thing at all.

A gig is not just about the performer. It revolves around the to and fro, the cycle of emotional energy and magic generated between the artist and the audience. You put out your best shot, the audience reacts and gives you something back. This spurs you on to put even more into it, throw out more electricity, and in turn it comes back, until by the end of the gig, everyone in the room is riding a high that can only be generated in that particular setting.

I turned down many offers to do live streamed gigs. I’d watched too many virtual performances suffer from dropped connections, lags, interruptions, strange notification sounds on phones, the artist not knowing when to start, and the deep discomfort on their faces as they tried to perform without an audience, eyes everywhere, not knowing where to look.  The thought of not being able to turn in the best performance possible gave me serious heebie-jeebies. I even wrote a poem about it, which I think explains my feelings perfectly:

when glass and fibre cable come between us.

I don’t know where to look.

There’s no eye meeting mine;

shooting up in shock, disgust,

We try our best but

the back room’s lacking electricity.

I cannot cast my words

upon a sea of bobbing heads.

No sound coming back to me;

a blank of gasp and chuckle

I have no mic to push and pull,

to shake, or paint with venom.

All hollow, I echo, the acoustics

in this kitchen leave me wanting

engineers in a tent, a field,

a pub, back room or big marquee,

who know their shit.

And afterwards, the chasm

of no hands clapping.

No glass raised, back slapped,

signed to a wife, mate,

Then where to put adrenaline?

Bring on 2021 indeed. But we still don’t know if the scene is ever going to be what it was. I was missing performing so much, I even started hankering after the midnight drive home, infuriating motorway diversions included!  So when I was asked to record something, for Gary Eagling’s ‘Punk For The Homeless’ campaign, I decided to take the plunge. A recorded set gave me much more control. My partner recorded me doing two poems on my mobile phone, and after many technical problems, I finally got it over to Gary. It was okay, but I still felt really weird about it, and the acoustics were dreadful! 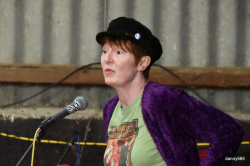 Then Gail Something-Else, who runs many brilliant grassroots festivals, asked me to record a set for her Virtual Bearded Theory Tea Tent. I love Gail and her festivals, so decided to do that too, but this time on my laptop. I cannot tell you how strange it is to perform to a webcam. It took a lot of practice rehearsing into the camera to get it right. I always like to have eye contact with my audience, to deepen the connections made, to make them really feel and be with me inside the poems, so this was important to get right. Eventually, I stopped looking at myself in the screen (!), and managed to only look into the camera. It sounded and looked much better than my mobile, and it was much easier to transfer the film itself. Gail did a fantastic job with embedding each video into her Tea Tent backdrop, and the event attracted a huge amount of Bearded Theory festival regulars, all chatting away to each other online, and commenting on each act. It was almost like being there, and absolutely everyone agreed it was the best virtual festival so far. The donations from the audience fed into the #FieldMe campaign set up by Gail, which is aimed at helping grassroots artists through this difficult time. The profits go to acts that rely, at least in part, on gigging to survive.

On a roll, I decided to take up Attila the Stockbroker’s offer of doing a set for his Virtual Glastonwick. This year’s Glastonwick festival was going to be the 25th anniversary special, and with so many of my friends also performing there, it promised to be party of the year, and was the one I was most gutted about losing. With new courage, I recorded a 20-minute set for it, and on the day itself, sat on my couch for 12 hours and watched the whole virtual festival play out. It was astoundingly good. With over 2,000 people watching all day and night, it was a roaring success. The cancellation costs of £1,500 were covered within the first hour of the festival, with the rest of the £5,000 donations going to the #FieldMe campaign.

With the tech wizardry of Paul Stapleton, the grit and determination of Attila, the hard work of them both and amazing audience engagement, it genuinely felt like a ‘real’ event, and I thoroughly enjoyed it all. As a performer, I had ongoing feedback from the virtual audience, built more of a following to my Facebook page, and sold loads of books. I even got the adrenaline high afterwards!

The virtual scene can never replace the excitement and euphoria of a live gig, but I have been converted to the potential for online gigs by these successes. I still won’t do a live streamed performance, but I am now saying yes to more recorded sets. To anyone watching any of the multitude of streamed gigs though, I would urge you to please make the effort to support the artists. A lot of work goes into what you’re watching, so why not buy some of their merchandise if you’re enjoying the gig for free? Help support them in these hard times so that we can carry on, get back on those stages next year, and give you that amazing live experience once again.

With that in mind, I would like to invite you to the Coronaverses: Poems from the Pandemic gig, to be broadcast on both Facebook and Zoom between 4.30pm-6pm on Sunday 28 June.  It will feature both live and recorded readings of the poems by the poets themselves. You are all most welcome to attend, and of course, buy the book! The Zoom details are included on the event page on Facebook, which you may find here:

Take care, stay safe, and we’ll see you all next year.

Fab article and poem Laura! I'm glad people are managing to adapt to this new world we live in. I'm guessing if you're a guest poet at an organised event like that, streaming can work.

I think on line performance at a local poetry group has its pros and cons. I've always been struck at certain venues by the number of people itching to perform themselves, but who then don't listen to other performers.

You also get the alcohol and the punch drunk affect. When people have had a bit to drink it's hard to focus on the words or how well they've been crafted. You have to be a real performance poet to inject that electricity you talk about and make people sit up and hear. That goes the same when there are too many poets and people are drunk on poetry and just want it to end so they can go to the loo or chat to a friend.

I suppose with a streamed event you'd really be performing to people with no background distractions and the capacity to listen to what you are saying and so get more from it.

I can imagine people being more selective about who they listen to though, knowing full well that no one will notice if they've crept off for a fag or mentally gone 'for the last bus home'.

I haven't taken the plunge yet because socialising was such a big part of it for me and that buzz that you talk about. I shall have to ponder it some more...