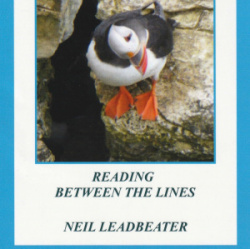 The poetry of place and a love and detailed knowledge of nature go hand in hand in the work of Neil Leadbeater, who in his latest collection Reading Between the Lines delights in excursions down country lanes, and detours off the beaten track.

In the first section, ‘Midland Ground’, he peels the “wrappers” of memory from childhood Midland industrial backdrops such as Thompson’s Foundry: “Years back your sound / was that of the weight of / a wrought-iron girder / hitting the ground / from a height.”

‘What I Found at Holt Fleet Growing in the Wild’ is a catalogue of wild plants such as horseshow vetch, wild liquorice, and viper’s bugloss (“stamens and stigmas / protruding like tongues / a snake about to strike”). There are more, waterside flowers listed and described in ‘A River Florilegium’ – marsh marigolds, water crowfoot (“painting your petals with / the kohl of dazzlement”), yellow loosestrife, water mint, and black knapweed.

Elsewhere there are similar lists of livestock: five breeds of cattle, and four kinds of pig. And did you know that all cattle are descended from as few as 80 animals that were domesticated from wild ox or aurochs in Iran some 10,500 years ago, according to recent studies? I certainly didn’t.

‘A Night on the River’ is a startlingly beautiful poem, full of unobtrusive music. Here it is in full:

At first there is the mirror image of alders

lying at depth in the river

and then the obfuscation of dusk

a string of waterfowl

We run our prow against flags and reeds

and lie in a loop, a deep bend,

Between sleeping and waking

There is a rare and arresting moment of emotion and remembered sadness in ‘Bibury’: “Grief does that to you. / It makes you want to cry your heart out / in pounds, shillings and pence.” The coinage gives some clue to the date. And there is pathos in the prospect of ‘Mrs Gilhooly, Dancing’ – “The recollection / of jumbled steps falls from her feet by chance / … Young at heart, she descends the stair - /  an old woman who has no shame.“ The poet, who now lives in Scotland, can also be found rooting round buildings in Dundee, including DC Thomson’s Courier premises, where he imagines “the Bash Street Kids running riot”.

If not in Caledonia , then on the Suffolk coast. In ‘A Young Person’s Guide to Benjamin’s Britain’ he sees the composer at Aldeburgh, walking out on the marsh, listening to a reed, or to gulls:

but most of all he’d listen out

for what he called his special sound –

that slow slither made by shingle

Some of Leadbeater’s poems are brief, little more than vignettes, that nevertheless succeed at catching the essence of their subjects. This collection is full of ‘just fancy that’ facts, in a way that few poetry books are, which is another good reason to recommend it. It covers a range of interests and subjects, and repays careful re-reading.