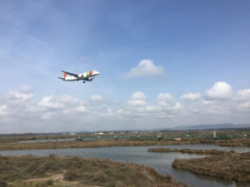 Sixty tonne of metal bellowing down the sky

of reeds and muddy pools

where spoonbills sift through sludge and seagulls drift nearby.

The mouth of the Ria Formosa’s a birders’ paradise:

in thousands upon thousands. It’s Eden beyond price

in every way but one: the fence of Faro Airport

a steel and concrete rind

around the commercial world; a fence with clear-cut purport.

And many times an hour the jets come blazing in

bouldering down the approach path

affronting devotees of nature with their din

and guilt flung in our faces: a similar murderous roar

in service of ourselves some several days before

provoking me to question the holiday I chose.

They have a word in Sweden

for guilt at flying: “flygskam”.

I feel my flygskam crawling like bugs beneath my clothes.

Sixty gram of feathers billowing along the bank

resolves into a subject

that makes our outing perfect,

this long but fruitful trudge past waders in their ranks.

As it labours closer we note the zebra flicker;

and recognise a hoopoe,

the sight of it arousing our heartbeats ever quicker.

Handmaid to the sun, her hair’s a blush of blossom

flaring in a fiery

her dagger subtly curled, a pink flush to her bosom.

She settles midst the flowers that frame an old brick building.

We view her greedily

while she waits, warily,

vouchsafing no one sees what den her brood’s concealed in.

The hut has hiding places, one better than all others,

For certain she deserves my plaudit, when this mother

unfolds her wings out wide

and breezily flaps away

prickled by a torment of flygskam not at all.

The Island of The Vaccinated ►

Thanks Greg. I wrote this a couple of years ago but decided to share it now after watching jubilant news reports about British holidaymakers flying off to the Algarve as soon as they are allowed but with no mention made of the environmental costs of air travel.