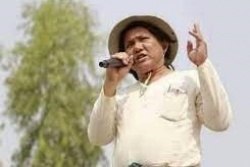 A Myanmar poet has died in detention and his body was returned with the organs removed, his family said. The Guardian reported the death of Khet Thi, who wrote: “They shoot in the head, but they don’t know the revolution is in the heart.”

Khet Thi’s wife said the couple were taken for interrogation on Saturday by armed soldiers and police in Shwebo, in the Sagaing region – a centre of resistance to the coup in which elected leader Aung San Suu Kyi was ousted.

“I was interrogated. So was he. They said he was at the interrogation centre. But he didn’t come back, only his body,” his wife, Chaw Su, told BBC Burmese language news .

“They called me in the morning and told me to meet him at the hospital in Monywa. I thought it was just for a broken arm or something … But when I arrived here, he was at the morgue and his internal organs were taken out,” she said.

“He died at the hospital after being tortured in the interrogation centre,” the Assistance Association for Political Prisoners activist group said in a bulletin that put the toll of civilians killed since the coup at 780.

Khet Thi was at least the third poet to die during protests since the 1 February coup. He had been an engineer before quitting his job in 2012 to focus on his poetry and to support himself by making and selling ice-cream and cakes.

More recently, he wrote that he was a guitar player, a cake baker and a poet – not someone who could fire a gun. But he also said: “My people are being shot and I can only throw back poems. But when you are sure your voice is not enough, then you need to choose a gun carefully. I will shoot.”

At least 32 writers and poets are in detention, according to PEN International, a global association of writers which has been tracking arrests. Two poets – K Za Win and Myint Myint Zin – were shot dead when the military opened fire on protesters in March. On Friday, U Sein Win, a poet, politician and philanthropist, was doused in petrol and burned to death in an attack by an unknown perpetrator. He is the fourth poet to be killed in recent months.

Myanmar poets used verse to resist British colonial rule, as well as the previous military regime, which censored and imprisoned writers. Poets would meet in tea shops to discuss their works, and use coded language to bypass censorship. When Aung San Suu Kyi’s National League for Democracy was elected to power in 2015’s historic election, after decades of direct military rule, 11 poets were among the candidates who won seats.

◄ Simon Armitage's Oxford lectures on poetry to be published

My kind of poet: the seriously funny Wendy Cope ►

It begs the pertinent question: are some people fit and able to rule
themselves? A shameful event that brings to mind the likes of the
Gestapo and NKVD in the fear of anything that might undermine
their merciless and unforgiving grip on the lives of others. Poets
are persecuted because they represent the freedom of thought that
dictatorial mindsets cannot tolerate.

A tragic story and a very brave man. You can kill the poet, but you can't kill his poetry.