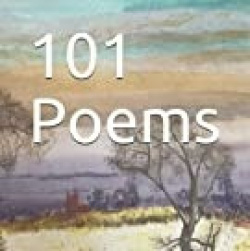 A 92-year-old poet has soared to the top of the Amazon poetry bestseller list, after his granddaughter urged friends on Twitter to support the book. Gordon McCulloch’s 101 Poems includes poetry about his wife who he lost to cancer, as well as his own illustrations. Hundreds of five-star reviews poured in for his work which he has been collecting for years.

His son William McCulloch told the Daily Record newspaper: “My dad has been writing for ages and tried for years to get them published. It never really worked out until now, my brother in London managed to help him and now he is on Amazon.

“He has been handing out copies to his neighbours and some people asked him to sign their book, he thinks he’s a celebrity now. It has been really good though and really gave him a boost which has been great.

Gordon’s book is described on Amazon as “covering a wide range of topics such as love, romance, relationships, religion, prayers, the meaning of life, death and our relationship with God. Some have been written in a manner that will provoke your innermost emotions, while others dig into the amusing side of life. All have been composed under the auspices of the Muse.”

Gordon lives in Braidwood, South Lanarkshire. His son said: “He lives alone with his pony in Braidwood and spends his time looking after it, he is very independent so doing this himself really means a lot.”

Gordon’s granddaughter Jessica Keachie posted a picture of him on her Twitter account asking people to support the book, saying: “My 92-year-old grandpa has just had his own book published with all his poems from his life. It’s available on Amazon if anyone is interested. A review would make him so happy.”

William added: "It is amazing seeing all these positive comments come in. He can't believe all the five star reviews. He is just completely chuffed with the response, we are all so proud of him. We are quarantining right now because my daughter has tested positive for Covid but when we can go see him and congratulate him in person we will."