This Kilt of Many Colours: David Bleiman, Dempsey & Windle 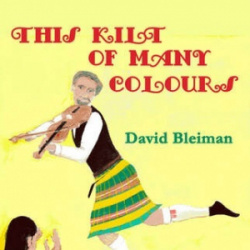 Different languages and diverse cultural heritages shape this multi-voiced collection. David Bleiman weaves his multilingual identity, embracing English, Scots, Scots-Yiddish, Spanish and Yiddish languages. His kilt is not only multicoloured but is also cleverly woven, expressing a striking richness of meanings. As Bleiman remarks in the preface: “I have found and assembled the ingredients of my own identity […] a complex mixter-maxter of family, history and of places.” This examination and exploration of identities is accomplished through language, although a better way of putting it is that he does this through different languages that he combines.

Bleiman’s ancestors were Ashkenazi Jews who settled in Germany and France in the Middle Ages, then moved east after persecutions and pogroms. He lives in Edinburgh, where the Scots and Yiddish languages merged in the past, creating a Scots-Yiddish idiom with similar sounds, for example in the pronunciation of the voiceless velar fricative, as in the word loch.  Scots-Yiddish had died out by the 1950s, but Bleiman reinvents it in the poem ‘The Trebbler’s Tale’, which won first prize in the Scots Language Association’s Sangschaw competition in 2020. The poem is about a Jewish traveller, an itinerant salesman, Dovid who goes to Fife to sell his wares. The story unravels in an incident in which a customer gets him drunk and steals his merchandise. At the end of the poem, Dovid feels terrible as he has lost all his money and is suffering from a hangover. The poem plays with words and sounds and in the last stanza regrets the fact that Scots-Yiddish disappeared:

Noo Dovid an his leid are lang syne gane,

The collection is divided into three sections, Traces, Mixter-maxter and Marmalade, which  trace the journey in the labyrinth of the complexity of the self where “words open wounds – open worlds” (‘Alphabet’). This is realised in a constant remembering of origins that are scattered and in flux. This condition is not only related to Bleiman’s experience but can be considered universal in a wider human perspective. Therefore, the concept of belonging is rooted in the place where we live, though temporarily, and is also loosely connected to all the places and cultures our ancestors inhabited. This idea enlarges the concept of identity and is characterised by enriching multiple views.

The first poem, ‘Duende’, as well as the last poem, ‘The Ballad of Fuente Grande’, frame the collection, emphasising the commitment of the author to experiencing life with passion. He refers to Garcia Lorca’s lecture ‘Juego y teoría del duende’ (‘Theory and function of the duende’, Buenos Aires, 1933) in which Lorca speaks of the inspirational power of the duende. Traditionally, the duende is a spirit, a pixie, but for Lorca it is a physical and emotional reaction to art that comes from within and from the blood. It is a mixture of joy and pain and is linked to death. Lorca finds the duende in the Gypsy culture of Andalusia; it is a mysterious force that he also connects to religious mystics, such as St Teresa of Ávila and St John of the Cross, to poets such as Rimbaud and Lautréamont and to artists such as Goya and El Greco as well as to bullfighting and therefore to the spectacle of death. In Bleiman’s work, the duende is expressed in remembering the physical pain he suffered after an incident when he jumped from a moving bus. His face was covered in blood and his knee hurt. The lines open to reveal memories that dig into the past and shape the present.

What is your melody,

Who inscribed ‘Ayy’ on your base?

Who carved and shlepped you

The Jew with a fiddle (yidl mit’n fidl) is reminiscent of the same recurring figure in Chagall’s paintings and also evokes the persistent threat of persecutions and killings in Jewish communities. It is important not to forget not only the Shoa, the Holocaust of the second world war, but also the previous persecutions and killings of Jewish communities that happened in the Middle Ages and in the modern world.

A particularly moving poem is ‘Shvelbele’ (‘Little Swallow’), about his mother’s origins. The poem alludes to different countries where his ancestors lived and ends with meaningful remarks about the universal condition of migrants:

We are a sweep of swallows

and we wander on the wing,

that you may inscribe your meanings

in this seasonal migration,

by the makings of your mind.

Identity is therefore fluid and is linked to the matriarch of the family, his mother, to whom the collection is dedicated, and goes back to his grandmother as well, Oma Ethel, who lived in South Africa and “spak three languages in ane”. This ensures a continuity that is rooted in language:

that poesía makaronishe seeps in

so mebbe why A scrieve in Scots

is why A write at aa.

(‘Why Dae A Scrieve in Scots’)

That’s why he writes! He writes in Scots but also mixes it with other languages in macaronic poetry that skilfully plays with sound and deftly explores the author’s arguments from different sides. This state of mobility is expressed well in the poem ‘Our Chosen Colours’, in which identity is not only a choice but is also in progress:

from where we were born,

but from what we conceive,

from where we came

but where we are going

and what we do to get there.

The human condition therefore involves a tension that exists between a yearning for the universal, expressed in the metaphor of the stars in the poem ‘¿De dónde soís?’ (‘But Where Are You From?’), and the ‘polvo/de las estrellas’ (stardust); we are made of both. We live in the present and at the same time move forward; we are ‘el estar’ and ‘el estardust’. The duende reappears in the final poem; it ‘Clears my throat’, the poet remarks, echoing Lorca; he clarifies his position in a play of joy and sorrow, always remembering the past but also looking forward to the future.

David Bleiman, This Kilt of Many Colours, Dempsey & Windle, £8.00

◄ Bringing the poetry community together: join the first online Spoken Session on our new Patreon channel - and help us grow!

Separation, loss, inspiration: six poets talk about how the pandemic affected them ►