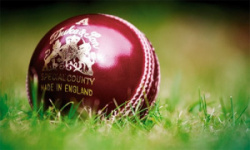 1976, that summer’s heat making light work of my shoddy whites.

Sweat beads slip from my crown, wiped from my brow,

They run the bails of my fingers, to where a rubicund sphere sits.

As a boy, it held no mystery, taught me no lessons,

It told no lies, held no surprise, a simple ball to my eyes.

And I, a player in its game, out in the field, making up the numbers.

That crimson globe quartered and sown, it spoke to me of course,

Of noble Englishmen, and some again, who tasted sour defeat.

Of being a sport on the village green, the pride of playing for your team.

In our green and pleasant land, the Duke still holds command,

Not for us the Kookaburra or SG.

We wrote the rules, gave ourselves the tools to suit our game plan.

Now as a man, I understand, why its lustre is no more,

That battered orb, my palm absorbed, a former grand rondure.

And if I speak of reasons, umpires signal treason, in this once tolerant isle.

Our seamers’ aim was English gain, no matter where the country or field,

Once with that ball, we conquered all, now our empire has been dismissed.

We govern no more from these tiny shores, our opponents are free at last.

No sound of leather on bat, cries of “howzat?” can mask committed crimes,

No wax should erase those red stains, left by tourists in their time.

Let the six binds of this twine, always remind of the scars we caused to be stitched.

Malay rubber inside, under tanned Scottish hide, five strings to tie and thatch,

To rivers that bleed, and waters that feed the Ganges, Nile, and Potomac.

No amount of spinning can cloud the sinning, or desire to win at all costs.

You wanted riches and fame, so up sticked the game, and raped every global wicket,

And now you rue the day, as you hear natives say, “just admit, that really wasn’t cricket.“

So, at the crease please don’t linger, Dickie Bird has raised his finger; this test you have lost.

Thank you very much Greg, your kind words are appreciated. I'm sure you are right about the Windies, they were an awesome team back then, but being 16 at the time, my memory is a bit dusty.

A "good day" eh, Greg? 😉
I have many fond memories of the game - starting with those of
England (with Frank "Typhoon" Tyson, Brian Statham et al)
taking the Ashes way back in 1950s Australia (celebrated in a
Picture Post publication in glorious black and white which was a
prized possession for many years). Then there was the sight of
the great Aussie fast bowler Ray Lindwall in action at Bristol with a run-up that seemed to start just inside the boundary. Poetry in
motion! "It's not cricket" remains the maxim for the ideal of fair play.
Long may it be so.
.

1976? Wasn't that the year that the West Indies came to England and won the Test series 3-0, with Viv Richards and Gordon Greenidge putting our bowlers to the sword, and their pace bowling quartet inflicting serious damage on our batsmen?