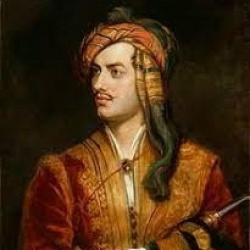 As Greece celebrates the bicentenary of its war of independence, a banknote has been unearthed by the Observer newspaper in the country’s state archives that offers lasting proof of the poet Lord Byron’s commitment to the Greek cause.

In the cheque Byron stipulates that £4,000 – roughly £332,000 today – be paid to Giovanni Orlando, a representative of the provisional government that, alarmed by the way the war was going, had approached the British peer for funds.

At the time Byron was on his deathbed. It was 18 April 1824. The great Romantic poet would be dead the next day. “I have given her [Greece] my time, my means, my health,” he is recorded as saying. “And now I give her my life! What could I do more?”

Byron died in Missolonghi, the malaria-ridden town where he had spearheaded the Greeks’ revolt against Ottoman rule. The man who was “mad, bad and dangerous to know”, a celebrity of his day who was loved and loathed in equal measure, had spent a mere 100 days in the land whose freedom he had championed.

The money was to go towards emergency needs – notably financing a fleet to defend Missolonghi from besieging Ottoman Albanians. Both sides agreed it would be repaid against a much bigger loan to be raised in London where Orlando was headed.

“Because of his fame, Byron was much forged,” said Dr Christine Kenyon Jones, who studied many of the poet’s manuscripts in the course of co-authoring a new study of Byron’s portraits, Dangerous to Show. “But it looks as if this is an original signature attached to the script of a clerk, which he seems to have impatiently corrected.”

Byron agreed to the loan in Kefalonia, part of the British-run Ionian Islands where the poet and  fellow travellers had stopped on their way to Greece. The cheque, subsequently cashed in Malta, was taken in the form of silver Spanish dollars and transported in trunks to Missolonghi. The money was then used to fund fighting ships run as a commercial enterprise by profit-minded Greek islanders.

Byron used his fame to promote internationally the Greeks’ fight for liberty. The Observer report says that his role as a moderniser, embracing the values of the Enlightenment, was decisive in determining the course of an uprising otherwise plagued by factional intrigues and outbreaks of civil war.

◄ Poet laureate's elegy to Duke of Edinburgh on day of funeral

'Mama, with an axe, trudged tirelessly each day through deep snow' ►