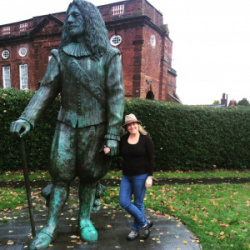 Do you know about the 'Childe of Hale'?
The man behind much folklore and tale.
As a real life Giant he acquired his fame.
At 9 foot 3, John Middleton was his name.

With just a small house, and no giant bed.
Slept with feet out of the window instead!
His snoring could be heard from far away.
Great strength he had, people would say.

And as the Childe of Hale grew and grew.
So buttons off his jackets flew and flew!
Bodyguard to a Sheriff, a role once to own.
Way beyond Hale, he soon became known.

He fought the King's wrestler and he won.
He left his opponent with a broken thumb!
Once stood a sculpture, carved from a tree.
Resembling John Middleton, for all to see.

From Speke Hall follow his Woodland trail.
With items dedicated to the Childe of Hale.
Now in the village a new statue does stand.
A chance to look up to John, hold his hand.

Braenose College remember the childe too.
His name was given to its rowing boat crew.
In Hale, with his Cottage, statue and grave.
The memory of John, they will always save.

Sing A Song (For us Tonight) ►

Reminds me of Jimmy Dean's 'Big John's. Love this