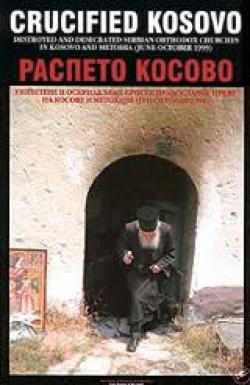 A vanishing life along these cobbled streets,
endless grey days of August in the Balkans
At heart my Orthodox soul grieves
for these long centuries of despair
and for all the bodies that were left there.

Landless, we were robbed by the Turks,
our churches smashed,
our daughters raped
our sons taken as Janniseries
to return to us as the sultan's savages.

Even in holy Constantinople
we  buried our dead at night
out of sight of  these  strutting converts.
Renegade Croats, Serbs,
who spat on their compatriots
and  took the Turkish gold.

Our memories have lasted for 800 years
Our faces  ground further into the mud
by  the 13th SS Handzar brigade.of Nazi Muslim turncoats.

Finally, NATO bombed holy Kosovo
back to the sixteenth century
as the Turkish-Albanians took
the holy Serb land.

Count the bodies left behind
out of sight and out of mind.

◄ The speech of angels

It is my pleasure Keith. Good Friday will soon be upon us and then Easter, the risen Christ. Do you remember the hymm 'There is a green hill faraway...'. it always moves me.

Yet the Faith survives through great suffering. A resilient Faith borne out of love for Christ. Thank you for this.
Keith

Watch the film 'The Whistleblower' and you know NATO will one day pay for its crimes.