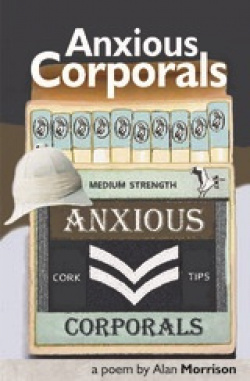 Alan Morrison is a left-leaning, much-published poet and editor who can produce wonderful, ringing phrases of denunciation: “O what hope for red roses / To grow among the thorns of red-top-hypnotised, populist- /Supporting  proles … Boris’s blue-collars, his batmen / Bootscrapers.”

Anxious Corporals is described as an “essay in verse about education and class … the victory of shopkeeper values and the defeat of the post-war consensus”. The thrust of Morrison’s argument comes on the second page: “Easy to forget that mere decades ago the working and lower- /Middle classes comprised armies of aspiring self-improvers, /Intellectually inquisitive and culturally acquisitive/ Knowledge-hungry thought guerrillas …”

Penguin and Pelican paperbacks sold in Woolworths are mentioned, along with that investigator of the working-class, Richard Hoggart, plus HG Wells, George Orwell, and Labour’s 1945 election victory, as contributing to the climate of self-improvement of the working class - the same class that now in the 21st century employ their “vast flatscreens as altarpieces”.

So what happened? Among many other things, a newspaper called The Daily Herald was founded for the common reader by a print union in 1910, was rebranded as The Sun in the 1960s, and was bought by Rupert Murdoch at the end of that decade. The rest, as they say …

The “infantilising of information, flat-/Packing of facts to fit smallest palates” … youth culture starting in the 1950s … It is splendid, tub-thumping stuff, and all true, if unlikely to win back Labour’s lost northern constituencies.

Morrison’s final page sympathises with the battle-scarred “Scuffed corporals of the pavements, many army veterans / Among them, Afghanistan-traumatised, Iraq-deracinated”. He has a romantic, idealised vision of one such veteran and victim picking up an old Pelican paperback, and experiencing an epiphany of self-improvement: “Look! There, one such, his grimy fingers gripping a cracked / Pale blue spine of charity shop surplus – he’s entranced, / Immersed in his inner flow, his inner flourishing rushing in / Him, flooding his senses, seeping into his perception.”

Education, education, education, as someone once said? I have great sympathy with Morrison’s views, and enjoyed his previous, 2019 publication Shabbigentile. He also came up with the wonderful word “lumpenpoetariat” while editing The Robin Hood Book anthology some years ago. For those with similar feelings, his latest book examining the rise and fall of working-class self-improvement is definitely worth a read, and will certainly repay re-reading.

A word of warning, though. I do fear that he buries so many great words and phrases within page after page of dense text that deters both the reader and this reviewer. The only separation of the text at all is into numbered chapters. Forgive me, Alan Morrison, if I have failed to do your book justice. But you could have made it easier - more accessible for the aspiring, working-class reader, perhaps? If there are still any of them out there …