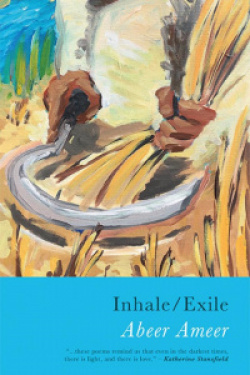 Abeer Ameer is of Iraqi heritage, was born in Sunderland and grew up in Wales. She trained as a dentist in London and completed an MSc, developing an interest in the treatment of anxious patients and mindfulness. Her poems have been published widely in journals and anthologies. Inhale/Exile is her debut collection.

For days I misread the title of this book as ‘Inhale/Exhale’ – the kind of thing practitioners of mindfulness suggest you should focus on when concentrating on your breathing, which is one of the things we automatically do in order to survive. For some, exile is another means of survival.

From an historical perspective, Ameer’s subject matter is the legacy of the Sykes-Picot Agreement and, in our own times, the US-led invasion of Iraq and its aftermath.

The first person pronoun is absent from this collection. How refreshing that is for a change. Ameer concentrates on the lives of other people and how they have been impacted by political events beyond their control. She gives us glimpses of what life is like for individuals living under siege, fleeing civil strife or trying to forge a new identity in exile. We are introduced to the postman who lays his life on the line for the sake of saving others, the teacher who saves his student from an interrogation with the secret police, a prisoner whose only hope is that there is a god, an army doctor who "finds himself caught / between / captive and executioner" and a mechanic trying to come to terms with the trauma of everything he has seen and experienced in the war. Throughout all this, a seven-part series entitled ‘The Fugitive’s Wife’ runs through the text acting like a recurring theme to ground us in the present moment.

The title of the book is taken from the sonnet ‘The Reed Flute and I’:

As the reed flute sings you weep your sorrow;

your heart still beats in the place you left. The weight

of your yesterdays that were once your tomorrows

halves you, just like the day the reed was cut

pulled from its bed, carved to carry the breath

of the carver to ears held far. Its inhale

is your exhale; as if straight from your own chest.

Its wails redden your eyes. Its larynx speaks your exile.

The cover painting ‘The day the reed was cut’ by Grischa Goldbeck, illustrates the point.  Inhale/Exile is also about inhaling the scents of the past and the memories they evoke in exile. Such moments come to the surface in poems such as ‘Learning to Make Iraqi Pickle’, ‘Green Ink’ and ‘The Interpreter (Alif to Thaa)’.

Despite the subject matter, Ameer writes at times with a wry sense of humour. But the overwhelming sense that comes across is her honesty and compassion. Like a war correspondent, she reports the facts as she finds them, does not point the finger of blame at anyone in particular, but reaches to the heart of the matter which is always the “search for home between two rivers”.

Ameer’s poems are powerful. They punch our conscience hard. In ‘Kurdish’ we are reminded of a race whom Sykes and Picot had forgotten about:

It hadn’t crossed their minds

that the Kurdish people

and a circle dance of their own.

‘Price Tag’ is based on a television interview Madeleine Albright gave on 12 May 1996 about US sanctions against Iraq. When asked by Leslie Stahl if the price was worth it, Ameer writes:

She didn’t twitch, deny or confirm it

that half a million children had died.

But the price, we think, the price is worth it.

‘Photographer in Halabja, 17th March 1988’, raises the ethical issue that all photographers must face when working in a war zone: how to tread that fine line between the need to bear witness to injustice while at the same time avoiding a charge of voyeurism:

to capture this perfect still life

Hands shake as he takes the parting shot:

newborn face towards the camera.

his right index finger, his retina.

Stylistically, Ameer makes use of both traditional and experimental forms. Sestinas, sonnets, ghazals and villanelles sit side by side with inventive free verse forms. In ‘The Journey’ and certain sections of ‘The Fugitive’s Wife’ the spaced out text which departs from the margin effectively conveys memory gaps and the geographical trajectories of flight.

This is a very fine debut collection. Highly recommended.

◄ The Feel-Good Movie of the Year: Luke Wright, Penned in the Margins

'We go nowhere for weeks. We're stiff and silent in these rows' ►

A powerful review, Neil, of what you convince us (certainly me) is a powerful, vital collection.