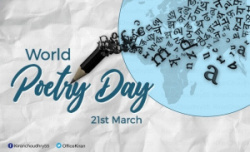 The Bolton-based arts organisation Live From Worktown is staging a virtual Cultural Cabaret event to celebrate World Poetry Day on Sunday 21 March at 7.30pm. Fourteen poets will be reading 14 poems, many in translation, but some in the original languages; sources include Russian, Spanish, Chinese, Japanese, German, Polish, Greek, Tamil, French, Persian, and Uzbeki. The event will be compered by Dave Morgan, and there will also be music by Eric Lever. It will be broadcast on Live from Worktown’s Facebook page

Meanwhile BBC Four has lined up an evening of poetry programmes to mark World Poetry Day, beginning with a documentary about ‘In Parenthesis’, which is considered one of the greatest literary works about war. Published in 1937, it is based intimately on the wartime experiences of its author David Jones, who volunteered to fight when he was just 19, and who remained a private throughout the war.

In this programme, starting at 7pm, the poet and author Owen Sheers traces the story of ‘In Parenthesis’, from an English parade ground to the carnage of the Somme offensive, with readings of key passages, insights from poets such as Simon Armitage, and interviews with David Jones experts.

At 10pm there’s the controversial 2003 film about Sylvia Plath, Sylvia, starring Gwyneth Paltrow and Daniel Craig, while at 11.45pm Kae Tempest hosts a night of poetry in Performance Live.