Alexa, what is there to know about love?: Brian Bilston, Picador 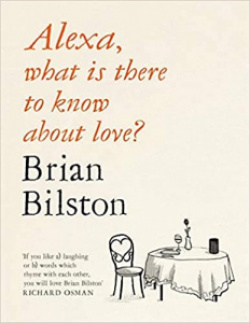 How has a poet with a pseudonym, whose work mostly rhymes and includes a large slice of humour, amassed so many followers – more than 80,000 at the latest count – on Twitter? The answer may indeed lie mainly in the wording of the question, of course.

Rhyme and humour are particularly appealing to those who may feel they don’t ‘get’ most poetry.  But Brian Bilston – previously portrayed as a pipe-smoking cove of uncertain age, but now seen inside the back cover of his latest as a younger man bashing away at a reassuringly old-tech typewriter – has also developed a reputation as an honest broker, as a fount of good sense in this crazy, mixed-up world.

His second poetry collection, Alexa, what is there to know about love? contains a number of amusing, poignant, and often beautiful poems about love, taking up the first and last sections of the book. The first section includes ‘The Cavemen’s Lament’, encompasses Plato, Cleopatra and Candy Crush, and a poignant ‘Three Postcards’, set during the first world war.

We move on to modern life in the second section, with poems such as ‘There’s a Supermarket Where Once the Library Stood’; the procrastinating ‘To Do List’, with its “stroke the cat” refrain; and ‘As Easy as Alpha Bravo Charlie’, with Bilston wrestling with the Nato phonetic alphabet.

Those of a conservative nature may perceive him as one of their own because of his general adherence to rhyme.  But the sage of Twitter has his sharper side, as in ’57 Varieties’ of Brexit, and ‘Hold my hand and let’s jump off this cliff’, another poem on the same theme:

I said, But this cliff’s more than three hundred feet high

and my doctor tells me if I jump I will die.’

They cried, ‘Don’t listen to experts. You can trust us.

We read all about it on the side of a bus.’

He deals crisply with deniers of climate change and many other things in ‘From the Encyclopaedia of Alternative Facts’. There is also one of the most powerful poems of empathy for refugees that I have encountered, called simply ‘Penguins’, that includes the rhyming of “smirk” and “paperwork”.  Meanwhile the former president of the US gets short shrift in a poem about repainting ‘The White House’ with “the new range from the Du Lux Klan”.

His long correspondence with ‘Mrs Fatima Sabah Abdallah’ is a delight, as are his safety tips, ‘Please Read These Instructions Carefully’, before engaging in an “operation much easier to complete / when performed by two people”. The internet is a soft but reliable target in poems such as ‘Customers who Bought this Book also Bought’, and ‘ee cummings attempts online banking’, with the lower-case-loving poet experiencing no little difficulty with password instructions.

The final section of the collection returns to the subject of love, kicking off with 10 hilarious ‘Lonely Hearts’ haiku; a saucy ‘On Finding Myself within the Pages of a Mills & Boon Novel’; and a wonderful ‘Wedding Anniversary’ poem that all long-married couples should recognise. There are beautiful love poems that knock you for six, such as ‘Might Have, Might Not Have’, ‘The News Where I Am’, ‘Early Morning Symphony’, and ‘She’d Dance.’

The final poem, ‘Gun Fight in the Last Chance Saloon’, sums up Brian Bilston’s defiant and quietly revolutionary appeal, to my mind. He may long for a “slow news day” in one of his best-known poems, ‘Serenity Prayer’, but make no mistake. Laughter may be the best medicine, but it is also an excellent weapon when used with craft and skill. This poet is dangerous.

◄ Wordsworth? Just ‘a stuck-up old poot’, according to those in the know

How much do we value our health workers? One poet's reaction to news of their 1% pay rise ►