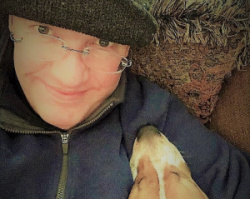 James Pollock, a Canadian poet and critic, has won this year’s £10,000 Manchester Poetry Prize. The prize was devised in 2008 by the former poet laureate Carol Ann Duffy. It is run by the Manchester Writing School at Manchester Metropolitan University, where she is creative director.

The judges were the Forward Prize-winning poet Malika Booker, chair and Lecturer in Creative Writing at Manchester Metropolitan; Mona Arshi, who won the same prize in 2014; and poet Mimi Khalvati. They praised the "formal skill, marvellous musicality and depth of thought" of Pollock's formal, eight-line poems inspired by everyday objects.

His poems 'Lighter', 'Scale', 'Screw', 'Sewing Needle' and 'Microphone' were described by judges as "an exquisite piece of machinery, mirroring its subject, every cog and wheel finely oiled and finely dovetailed”.

Booker said: "These poems could only have been written by an accomplished poet with a wonderful ear. These poems were delicious on the tongue and we had pleasurable moments reciting the words aloud in order to savour and celebrate these compact poems, that are, in a way, metaphors for poetry itself."

Pollock is based in Wisconsin, US. His first collection Sailing to Babylon (Able Muse Press, 2012), was a finalist for the Griffin Poetry Prize.

Alexa, what is there to know about love?: Brian Bilston, Picador ►