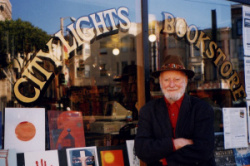 One of the last members of the American Beat poetry scene, Lawrence Ferlinghetti, has died at his home at the age of 101. Ferlinghetti co-founded the City Lights bookstore in San Francisco, and was tried on obscenity charges after publishing Allen Ginsberg's Howl and Other Poems in 1956.

In 1953, Ferlinghetti and Peter Martin opened the City Lights bookstore in San Francisco, to help support their magazine City Lights, which was named after Charlie Chaplin's 1930s movie. In 1956, Ferlinghetti published Allen Ginsberg’s book Howl, which resulted in his being arrested for publishing “obscene work” and a subsequent trial that gained international attention. At the end, the judge concluded that Howl had “some redeeming social importance” and “was not obscene”.

City Lights became known as the heart of the Beat movement, which included writers such as Gary Snyder, Allen Ginsberg, and Jack Kerouac, although Ferlinghetti did not consider himself a Beat poet.

Ferlinghetti visited Britain, reading at the legendary Morden Tower in Newcastle, and also appeared at the even more legendary International Poetry Incarnation at a packed Royal Albert Hall with Ginsberg and Gregory Corso before an audience of 7,000. He appeared, with Ginsberg and Corso, in the Penguin Modern Poets series.

You can read Ferlinghetti's poem 'I Am Waiting' here