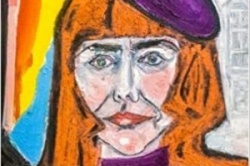 This debut collection of poetry and visual art by Vanessa Vie opens with an epigraph by Lawrence Ferlinghetti, from which it takes its title, and a foreword by Michael Horovitz, veteran Beat poet and publisher of New Departures, who is also described by Vie as her “Muse”.

As Horovitz recounts, Vanessa Vie grew up in northern Spain but “decided to stay in Albion for good in 2000” after “absorbing herself in the visual art and poetry of William Blake”. This uninhibited and exuberant collection is made up of seven sections, touching on anything from nature, metaphysics, and Christian myths, to music, sex, love, Grenfell Tower, and outdoor workers, including dustmen, scaffolders and roofers.

Poem titles include ‘After Seeing A Voluptuous Bosom’, ‘Arisen from Out of My Brown Doctor Marten Shoes’, ‘In Defence of Allen Ginsberg’s Nakedness’, ‘Four Weeks of Jazz Record Requests’, and ‘O Dustmen, Dustmen’. I have found it problematic to select particular lines or phrases, but will pick out these lines from ‘Four Weeks of Jazz Record Requests’:

for her organic-food shop shift to end – revelling

Spinster jazzed up by poetry Slams – with a figure

jarred by years of men

There’s a proper music there, as there is in many of the poems. Read them, and imagine a wandering saxophone, perhaps. Vie celebrates the work of dustmen: “How vulnerable we feel / After just one missing round: / Eyes-bulge, nose-cringe”, as well as admiring her pubic hair in the bath, “Seaweed / Untangled and waved”. There are also the accompanying and engaging pictures - often, it seems to this inexpert eye, influenced by Picasso.

I have seen Vanessa Vie (she is also a singer-songwriter-musician) perform alongside Michael Horovitz a couple of times. At Kensington Town Hall in 2015 I reported:  “Vanessa Vie emphasised the esoteric and eclectic, at one point exclaiming ‘Bedlam, bedlam, bedlam!’ in such a way that I felt compelled to note it down.”

Her jazzy and impressionistic poems have a real charm; the book is beautifully produced and well worth the price as a literary object, the first New Departures publication since 2007. It represents another collector’s item for those fascinated by all things Beat.