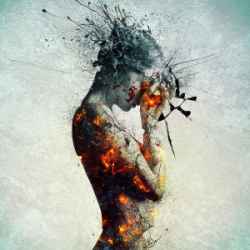 Her thoughts were wildly out of sync,

As she had way too many to drink.

They danced together so he thought the lines were blurred,

Even though the words she spoke were slurred.

He felt they were antithetical to her actions,

So he ignored it thinking of his own self satisfaction.

His desires then overtook what was left of his humanity,

She clearly wants it wearing that short dress?”

Though she continually resisted he went against her wishes,

Staining what was once her purity, for a quick finish.

He left her feeling helpless and to blame,

But she never came forward in fear of being slut-shamed.