The Call of the Clerihew: ed. George Szirtes and Andy Jackson, Smokestack 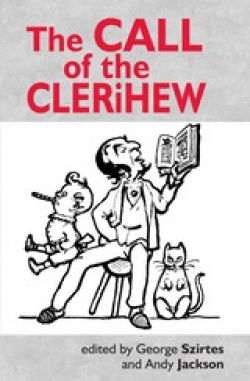 A clerihew is defined on the cover of this anthology of 800 examples of them as “a childish anti-panagyric, a flat-footed, Hidibranistic, eponymous quatrain designed to cut everyone down to size”, and in the preface by the editors as ‘the limerick’s shorter, smarter sibling’ — it makes its point in four lines as opposed to the limerick’s five. It‘s named after Edmund Clerihew Bentley. Writing in the first half of the 20th century, EC Bentley was a journalist and novelist, who died in 1956 leaving a literary legacy of largely unmemorable detective novels and three successful books of biographies in which he lampooned figures from past and present, history and fiction, in the poetic form that bears his name.

In their preface George Szirtes and Andy Jackson set out the rules for writing clerihews very clearly, pointing out that the first line of the four must always consist of the name of the subject of the poem, the rhyme scheme (AABB) must be very tight, but that there are no metrical constraints on the lines. The resulting mini-biographies combine irreverent satire, inventive manipulation of sound to produce end-rhymes at all costs, ridiculously irregular metre and line-lengths, and little grains of fact, producing effects that are gently humorous, often surreal, and sometimes hilarious.

Fifty poets are represented in ‘The Call of the Clerihew’, brought together in a Facebook Clerihew group over several years. They range from ‘serious’ poets to poets known for their comic writing, and from well-known writers to more obscure names. The editors have given their book a strong structure by grouping the poems under headings, arranged in alphabetical order: "Ancient Rome and Ancient Greece", "Artists" and "Australians" are the first three sections, while at the end of the book we find "US Politics", "Television" and "The Editors". Were this book to be re-edited today, no doubt the last section would be "Zoom Events."

What examples to offer you from these 800 gems? The editors make a fine showing. ‘Despots’ includes this from Andy Jackson:

Bit of a wrong ’un

Though being the subject of a personality cult could prove

and in ‘Poets’ George Szirtes made me smile with

will shortly be published in a book

For me the star and master of the form in ‘The Call of the Clerihew’ is Mark Totterdell. Again and again he gets the mix just right: here’s one of his (from ‘Playwrights’) that made me laugh out loud:

After much persuasion from his editor,

From writing ’Pygmalion versus Predator’.

‘The Call of the Clerihew’ testifies to the “addictive” pleasure of writing in this playful form. I was inspired to write a couple of clerihews myself after writing this review. It’s not as easy as these 50 poets make it seem.

The Call of the Clerihew, edited by George Szirtes and Andy Jackson, Smokestack, £7.99

Don't fence us in! Poets prompt pupils at the Giant Poetry Party ►

My copy has arrived - excellent service - to provide a nice follow-up
to my Covid jab also just received this Friday 5th February.

This is addictive stuff.....must order a copy.
Cigar-loving Columbo
Was no dumbo
He'd smoke out villains with his attack
Of guile disguised by a scruffy old mac.
P.S. Copy now ordered and anticipated with relish.

Sounds a lot of fun for disciples of the "tongue in cheek" tendency..
There are those who call themselves a poet
And do their best to make sure that we know it
Combining their scribblings in the direction
Of what is presumptiously called a collection ?.
.