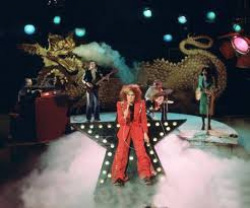 On this special day, a Dragon memory to recall.
It took place at the New Brighton Floral Hall.
T.Rex appeared on their Futuristic Dragon Tour.
The lights they dimmed, would the Dragon roar?

The mighty Dragon appeared as the curtain rose.
Swirls of smoke engulfed the stage from its nose.
It's eyes gazed right at me, all red they rolled.
Reflecting in dazzling light, it's armour lit like gold.

From head to tail The Futuristic Dragon did gleam.
In quadraphonic dimensions we heard its theme.
Suddenly the Dragon fell silent, it contained its rage.
As Marc Bolan with his Les Paul took to the stage.

(today is 'Apprciate A Dragon Day, so above is my memory of my fave Dragon!)

The Best Place Ever! ►