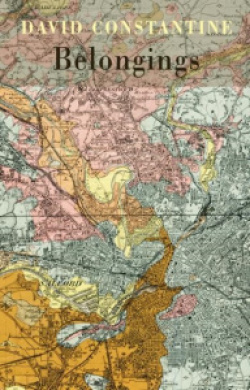 A map on the cover of a poetry collection is always a promising sign to me. And that promise is fulfilled in Belongings by David Constantine, recent recipient of the Queen’s Gold Medal for Poetry. Just like a map, the more you investigate Constantine’s work, the more you discover.

The first section of the book often specifically relates to cartography. In ‘Red’ Constantine is poring over a geological map of Manchester as a boy, and disappointed by the boulder clay, the glacial sand and gravel from the Lake District, “and the alluvial terraces / along our soiled river. I wanted outcrops, faces / Daylight apparitions of the city’s bedrock”. He looks for “the red stone through the soot / In a railway cutting close to home”, before being driven “Again and again to the uplands between the conurbations

The White Peak and the Dark

On paths as many as those that criss-cross your palms

Or climb the arbor vitae in your head

Or to all your body’s provinces feed the blood.

‘Lake’ has a Wordsworthian air, climbing up a river’s path to find at dusk a stretch of water “in its own terrain”. Here the poet beds down for the night, to listen to water lapping, birdlife, and the wind, before being woken by and glimpsing air travellers far above him. There are other poems in this section about being outdoors, “striding in sunlight on a high track” (‘Puddles on the track …’); memories of maps and of shared experiences – “Reading the map afterwards /  Assures us of our hinterland, all we got by heart / Through our boot-soles from the braille of the terrain (‘Maps’); the acknowledgement and melancholy of ageing:

How it dejected me concluding that last after-journey

To fold the map and slot it back where it belongs

In the hoard of the trodden, the untrodden

The never now by us to be trodden paths.

The second section of the collection is about islands and sea, set in the Isles of Scilly where Constantine has a home. The sight of sails, the sensation of being on the edge of the Atlantic ocean (as well as the edge of the map of Great Britain), exhausted swallows making their first landfall, long-abandoned bulb fields, and the search for a lost swimmer are among the subjects documented here. These poems reflecting the remoteness of the archipelago, despite its popularity with tourists, have an underlying wildness that is particularly satisfying if you know the islands.

Other poems in this collection contain measures of social anger. A poem about racism might well be referring in its title, ‘The Morning After’, to an important vote the previous day that made people with certain views feel emboldened, validated, vindicated. ‘Song: The way things are is the way things have to be’ is from a radio play by Constantine, and uses the game of Monopoly to illustrate an aspect of British society, by adapting a socialist slogan:

You are many, my friend, we are few

And few as we are we get more and more

And there’s less and less for you.

Constantine also writes about strange eccentricities: the sadness of men that attend garden centres; a neighbour deserted by his wife who takes out a futile horticultural revenge on her; the odd figures that perform at and attend a musical open-mic. A cycle race momentarily disturbs the dullness of a Sunday in a French town.

He is also known for writing about war: he has translated German first world war poetry, and his poem, ‘Soldiering On’, about the women left behind, was included in the Bloodaxe anthology The Hundred Years’ War. ‘The horseshoe’ was found by Constantine while trudging the ground where his grandfather died in 1916, and is now nailed over his front door; a second poem, ‘Fields’, talks of other battlefield finds:

A button, the shoe of a great shire horse, leather

Eyes down, the stumbling men closer and closer.

There are several poems about trees; an ash on Ingleborough, a hacked-back plane tree, a sycamore “coming into her own”. Constantine empathises with these living things. He writes in wonderment about a two-month-old baby, and there is another intensely observant poem about a young girl, possibly a grandchild, dancing; how instinctive it is. There is compassion for an old dog taking a one-stop bus ride because his legs can’t manage the distance; another poem warmly recalls a once-mocked schoolmaster.

There is a spirit that suffuses this collection, and it is perhaps best seen in ‘I will hold you in the light’, which is about relationships with loved ones, about the things that really matter. It reminded me of my wife’s Scottish grandmother, who in her final years used to greet or say farewell to family members by holding their face in both her hands.

A map of David Constantine’s poetry reveals many different features, including his work as a translator, but also certain characteristics; a clarity of expression, a reverence for nature, and an overarching humanity.