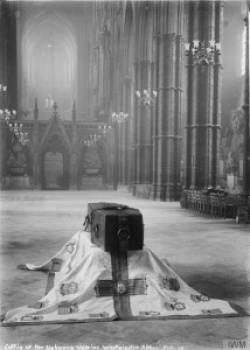 I could be your husband, father, son.

The lost bones of another pointless war.

A flag to drape across my resting place,

transported from a distant, hostile shore.

I could have been a tinker, tailor, thief ,

lying here for a century and more,

those passing trades mean little to me - now

the angry guns have relinquished their roar.

At least I’m home and represent the lost -

just one of thousands who all went before

and did not return to their hearths of peace.

Never forget we nameless, I implore.

I would argue that wars generally do have point, though we may not always agree with them. Land grab, ethnic cleansing, empire ambitions etc. We do however tend to see a point in fighting back against the aggressor.

thanks for the likes and the very kind comments I appreciate it.

I like the poem Ian, and war is many negative things but not always pointless. If we had taken that view 60 years ago, you and I would not be able to speak and write freely as we do now.

What a wonderful poem. Something about commemoration of loss seems to bring out the best in poets.

A lovely poem, thank you. I learned today that Brigadier General Louis John Wyatt who was responsible for selecting the Unknown Warrior is buried in our Local Churchyard alongside his wife.