The beautiful Cathars of Languedoc 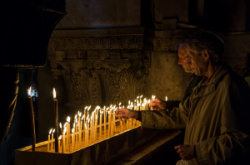 The ideas of the beautiful  Cathars of Languedoc spread across western Europe 700 years ago
Cathar comes from the Greek: καθαροί, katharoi, "the pure [ones]"
They built on the dualistic theology of Manichaeism
Which they blended with the eastern Christianity of Byzantium
They were ascetic: believing the material world was the evil realm of Satan

Whilst the world of the spirit was the beautiful realm of good God(s).
Within each individual this battle between Good and Evil was constantly mirrored.
This syncretic blend of religions denied the vengeful Jehovah of the Old Testament
And was anathema to the powerful in Rome who launched an Inquisition, the Albigensian Crusade
This attempt at the genocide of an idea led to tens of thousands being massacred

For instance, Simon de Montefort decreed than a hundred Cathars should have their eyes, lips and noses removed
A Cathar with one eye led them back to their village as a warning.
Cathars were strictly non-violent and this left them vulnerable to the hyper-violence of their age
From 1200 AD until 1250 AD thousands were burnt alive for refusing to recant or to take communion
It took hundreds of years to wipe out the human traces of this beautiful religion.

Now a few of their castles remain in the mountains of Languedoc
But their ideas have never died, they've come alive again in a new age:
veganism, vegetarianism, mysticism, free love, mindfulness, equality of the sexes, living in the moment, holistic medicine, friendship, generosity, open-mindedness, hope....

Plus ça change, plus c'est la même chose
For the beautiful Cathars of Languedoc.

Yes, John, I suppose all roads CAN lead to nowhere for in the country of the blind the one-eyed man IS king! Brian, I agree with Housman who said: 'I could no more define poetry than a terrier can define a rat.'

Enjoyed this, John. Lots of references for me to look up.
I do take issue with you when you say that no-one should stay on the road to nowhere. Just ask Paddy and Max.

Educational John yes, but a poem? Not in a month of Sundays in my book.

Thank you Cathy. Nobody need stay on a road to nowhere. X

Fascinating, heartbreaking, hopeful. I have never understood violence, especially to peaceful people. Looks like it’s been going on since the beginning of time and will continue until the human race truly evolves, may take a few more millennia. Thank you for sharing your educational and enlightening poetry! 🙏❤️