Poetry: compulsory or optional at next year's GCSE exam? That is the question 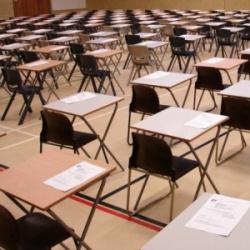 An exam body has quietly – or, maybe, not so quietly – reinstated poetry as a compulsory topic in its GCSE English literature exam next year. There was an outcry last month – in the poetry world, at any rate - when the exams regulator Oqual announced that poetry would be optional at GCSE next year. The poet laureate Simon Armitage added his voice to those of other poets, saying the move was sad, at a time when “poetry seems to be really having its moment, because of the comfort, consolation and form of expression that people have found in poetry over these months”.

At the time Ofqual said the decision to make poetry optional for next year was “ease the pressure on many students and teachers” after school closures because of coronavirus.

But earlier this month, on Thursday 10 September, one exam body, AQA, said ‘poetry anthology’ and unseen poetry’ would both be compulsory topics in their exam next year after all. However, this produced a new outcry – from teachers and students this time, making their views known on Twitter.

One teacher said: “How come this is TOTALLY different to the August announcements by Ofqual? Surely you know all schools have planned based on that? This is a disaster for students who placed their faith in this system.”

A GCSE student added: “This is ridiculous. I will be doing my exams next summer and this has just added tonnes of pressure on to me and everyone else. You want us to learn 15 poems of which we’ll use less than half of. That’s stupid in any case but especially now when we’ve missed so much learning time.”

Amid claims that “celebrity poets” had influenced AQA’s U-turn, another student said: Absolutely appalling. Where does one even begin to voice their thoughts on how outrageous this is. I'm 15, beginning year 11. A week and a bit into school I'm now being told that forget what we said at the start, you have to study all this now because a poet got sad that their poem won't be vigorously studied by thousands of students for the millionth year in a row (cough Simon Armitage). This adds more stress to stressful circumstances (corona) … It’s ridiculous.”

Taken aback by the “feedback”, AQA on the following day promised to look again at its changes. And on Tuesday 15 September it announced a partial climbdown. “We’ve listened to feedback about our changes to GCSE English Literature for summer 2021. As a result, we’ve been reconsidering our changes – so, as promised, here’s an update for you. Subject to Ofqual’s approval, we hope to be able to offer you a choice of two of the following: Anthology of poetry; Modern text; 19th century novel. Shakespeare and unseen poetry would still be compulsory.”

AQA added: “We realise you may have been expecting all poetry to be optional. Unfortunately this just isn’t possible, as the anthology and unseen poetry add up to almost 40% of our course – whereas the modern text and 19th century novel each account for around 20%. So making all poetry optional would risk not complying with regulations. We hope you’ll be happy with these changes. They’re fair for schools that want to continue with poetry as well as those that don’t.”

Confused? It all means that, subject to regulator Ofqual’s approval, there will still be a compulsory poetry element in next year’s AQA English Literature GCSE paper. However, it is understood that another exam body, Edexcel, is sticking to the original decision to make poetry optional at GCSE in 2021. What’s that you say? You couldn’t make it up?

◄ We Could Be Anywhere By Now: Katherine Stansfield, Seren