We Could Be Anywhere By Now: Katherine Stansfield, Seren 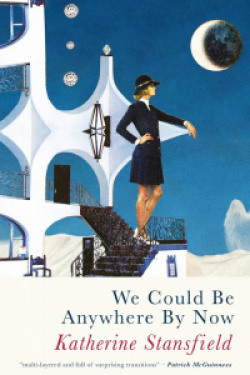 Novelist and poet Katherine Stansfield grew up in Cornwall and now lives in Cardiff. She teaches for the Open University and is a Royal Literary Fund Fellow.

The poems in We Could Be Anywhere By Now were written over a period of seven years and were inspired by her experience of moving to Wales, a country with its own official language, and recollections of her upbringing in Cornwall, an area with its own distinct language that, having once been almost forgotten, is now beginning to enjoy a bit of a renaissance.

The main themes running through this collection are interconnected: communication, language and identity. Each of the five parts that make up the structure of the book begin with a quote that is a ‘found’ form of communication: a comment posted on The Guardian online, a sign for a language centre in Heraklion, Crete, a poster on a community notice board in Cardiff, a sign on a tollhouse, and two signs on a lawn in Rhode Island. The subject matter is varied: Welsh language lessons, fear of flying, conversations on train journeys, a fire at the National Library of Wales, Yulia Skripal and the Salisbury poisonings, Tim Peake coming out of his space capsule after returning to Earth, a girl who wants to be the first person to walk on Mars, and a shopping trolley that is desperate to leave a supermarket to explore the wider world.

Despite the rigour with which Stansfield approaches her subjects, not all the poems work for me. Some of the poems in the fourth section of the book, for example, lack the gleam and polish to be found elsewhere. Having said that, there is plenty to admire in Stansfield’s poems which exhibit a quirky sense of humour and demonstrate considerable inventiveness that will delight many a reader of her work.

Stansfield is at her best when writing about language. ‘Welsh has no K’ sparkles with wit:

If I bend I could be Catrin

K as in break-in. Upstart

angles from the get-go

having to make do, finding

sticks to fashion my naming’s

to strike the look of me.

In some of her poems there is also a throwback to Kerewek (Cornish), a backward glance to the language of the place where she has come from. In ‘Cornish / Welsh / space’ she positions a Cornish word and its Welsh equivalent between couplets that are, by and large, linked to the meanings of the words. In another poem she writes of a made-up word invented by her sister and, in others, plants the occasional Welsh or Italian word within her texts.

Stansfield’s experience as a writer of crime novels and fantasy comes to the fore in ‘The Suitcases’ – a mysterious poem that suggests how easy it is to lose one’s identity when, without clothing (a form of identity in itself) we are in danger of disappearing from sight altogether. With each search, the poem becomes more and more elusive until, at the end, we are told that “none of this happened” at all. Fantasy alone is particularly predominant in ‘Mars Girl’:

She woke one morning and said she was going to Mars.

She was twelve and wore kitten pyjamas.

Her dad was over the moon & mars -

Stansfield’s poem ‘FOG,’ a word whose letters are in upper case in the title and throughout the text made me wonder if it was being employed in one or other of its many meanings as an acronym (Fear, Obligation and Guilt; Fat, Oils and Grease; Feet On the Ground; Flat Out Guess; Field Operation Guide ... one could go on) but in the end I settled for weather. It is Stansfield’s way of coming at a description of a place obliquely. Her striking image of the fog on the pier at Aberystwyth being likened to “fifty years of wedding dresses / pressed to the face” was just one of many that I found rewarding in this collection.

Her style is conversational. I suspect that some of her poems, in particular, ‘Fear of Flying Course,’ and ‘Misdirection’ fare better in performance than they do on the printed page. Others, such as ‘Tick ONE answer only’ and ‘Ecoutéz la cassette,’ are better on the page. In the latter, she writes about three different things that are going on simultaneously: a conversation that is playing out on a cassette tape, a silent communication between two students and the observed action of a teacher. The effect is rather like seeing something in 3D. This ability to handle several things that are all going on at the same time is one of her many strong points.

In this volume Stansfield often surprises with a sudden turn of phrase or pivots us unexpectedly into another direction of thinking. By the end, we could indeed be anywhere but where we thought we were, at the beginning.

Katherine Stansfield, We Could Be Anywhere By Now, Seren, £9.99

Poetry: compulsory or optional at next year's GCSE exam? That is the question ►